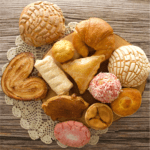 This guide to Mexican Sweet Breads (or pan dulce) covers only a few of the top favorites.

There are plenty more!

As you walk through towns in Mexico, the aromas coming out of a panaderia (or Mexican bakery) will make you drool.

Grab a tray and tongs. You’re in for a real treat!

What is pan dulce?

There are many different kinds of breads, and generally, they are not overly sweet like the American desserts.

The variety is impressive – soft, dense, salty, crumbly, etc. In fact, there are well over a thousand types of Mexican sweet breads.

Wheat arrived in Mexico along with the Spanish conquistadors. They introduced it in the 16th century. But, wheat didn’t rise to popularity until the French occupied Mexico in the 1800s.

Wheat rose in prominence once one little magical ingredient was added to it – sugar.

Along with the invaders from France came their famous pastry chefs. Then came both French and Italian coffee shops where people wanted a little something extra with their drink.

Pan dulce flourished under the presidency of Porfirio Diaz, a lover of all things French.

Over the years, Mexican sweet breads have changed into unique creations, shapes, and names.

Their names vary from region to region, but they’re all delightful treats.

Conchas are most likely the most popular type of pan dulce. They are easily identified by their shell-shaped sugar topping which gives rise to their name. You might see the topping made of vanilla, chocolate, or whatever the baker imagined that day. On the inside, they are pillowy, soft, and delicious!

Bisquets are Mexican biscuits. Another name for this popular pan dulce is “ombligos” or belly buttons. They are  buttery, slightly dense, and not very sweet. Slice them in half and top with butter, jelly, or Nutella.

Orejas, or translated “ears.” In the US, you might hear them referred to as Palmiers or Elephant Ears. They are buttery, crispy, and flaky. Made with puff pastry and easy to enjoy.

Marranitos are also called “puerquitos.” Both words translated mean “little piggies.” Made with a variety of spices like cinnamon and cloves, they are a childhood favorite of many Mexican kids and adults alike.

Cubiletes de Queso are very similar to mini cheesecakes. They are usually made of cream cheese or requeson (a type of cheese similar to ricotta). The crust is buttery and the inside is creamy and so yummy!

Polvorones are Mexico’s version of sugar cookies. Here you see it in pink, but you might also find them as chocolate, yellow, in a combination of three different colors, topped with chocolate chips, even a smiley face. Crumbly and delicious!

This Mexican sweet bread consists of rolled up flakey dough with a yummy filling. Vanilla custard is very common, but there’s also cream cheese, strawberry, guava paste, and chocolate. It is dusted with sugar. Perfect for your morning coffee.

Empanadas are yummy hand pies. A soft dough is made then stuffed with a yummy filling – vanilla cream, pineapple, apples, and more. In Mexico, you’ll mainly find sweet fillings, but there are bakeries that will make savory fillings like picadillo, tuna, cheese and pickled jalapeno.

See my recipes for:

Cuernos translated means “horns.” Also referred to as cuernitos, or “little horns.” They can either be savory or sweet. Above, you see a classic buttery, flakey croissant. The sweet version is more dense and sugary but shaped like a horn.

Mantecadas are easily identified by their red cupcake liner and their puffy muffin top. They originated in Spain where they were made with “manteca” or lard. These Mexican muffins are soft, spongy, and so yummy.

Besos translated into English means “kisses.” This bread consists of two pieces of bread kissing, or glued, with butter or frosting. Above is the traditional pink with shredded coconut, but there is an all-white version as well.

Pan de Muerto is the most traditional bread made during Dia de los Muertos. It’s a soft and orangey bread topped with what are supposed to resemble skulls and bones. This bread is often placed on altars during the Day of the Dead.

Rosca de Reyes is a traditional sweet bread made for King’s Day, January 6th. A tiny plastic baby doll representing the Baby Jesus is stuffed and hidden inside the dough. Tradition says that whoever finds the baby has to throw a party and make tamales.

Pan dulce can be enjoyed at any time of the day – for breakfast, as dessert, or a middle of the day treat with some cafecito.

There is no wrong way to eat a piece. The only crime is not having some.

Hope you enjoyed this guide to Mexican Sweet Breads.