Ensalada Navideña (or Mexican Christmas Fruit Salad) is a mixture of apples and other fruits covered in a dreamy and creamy dressing.
Jump to Recipe Print Recipe

Ensalada Navideña (or Mexican Christmas Fruit Salad) is a mixture of apples and other fruits covered in a dreamy and creamy dressing. Learn to make this traditional Mexican recipe by watching the VIDEO or follow along the step-by-step tutorial.

Usually around mid December, I start missing Mexico. I love the posadas. They are processions where people carry the nativity scene, or people will dress up as Mary and Joseph going to Bethlehem. Afterwards, it’s a big party. We’re talking HUGE spreads of food and maybe a piñata for the kids. I wish I were there… 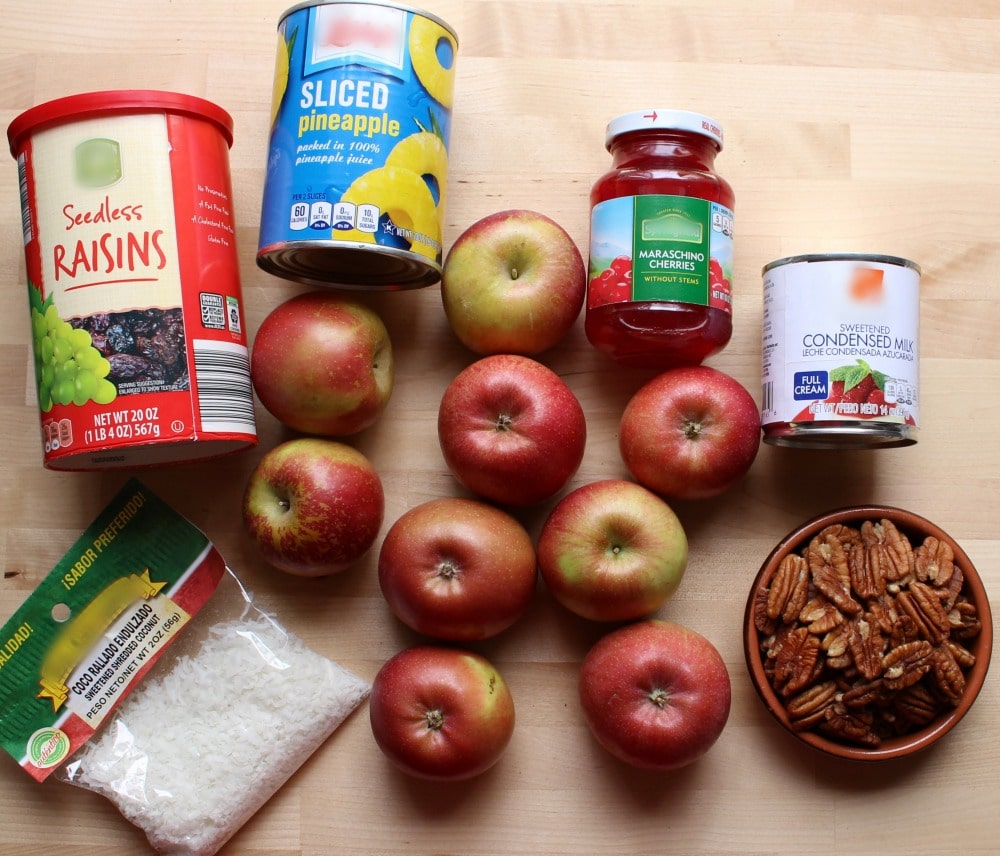 You’ll always find this Ensalada Navideña, or Mexican Christmas Fruit Salad, during the Holidays and at these big parties. Some people will also make it and eat it during their Christmas Eve dinner. That’s why it’s also referred to as “ensalada de nochebuena.” You can serve it during the meal itself or have it as a dessert. Such a super easy dish to make too. 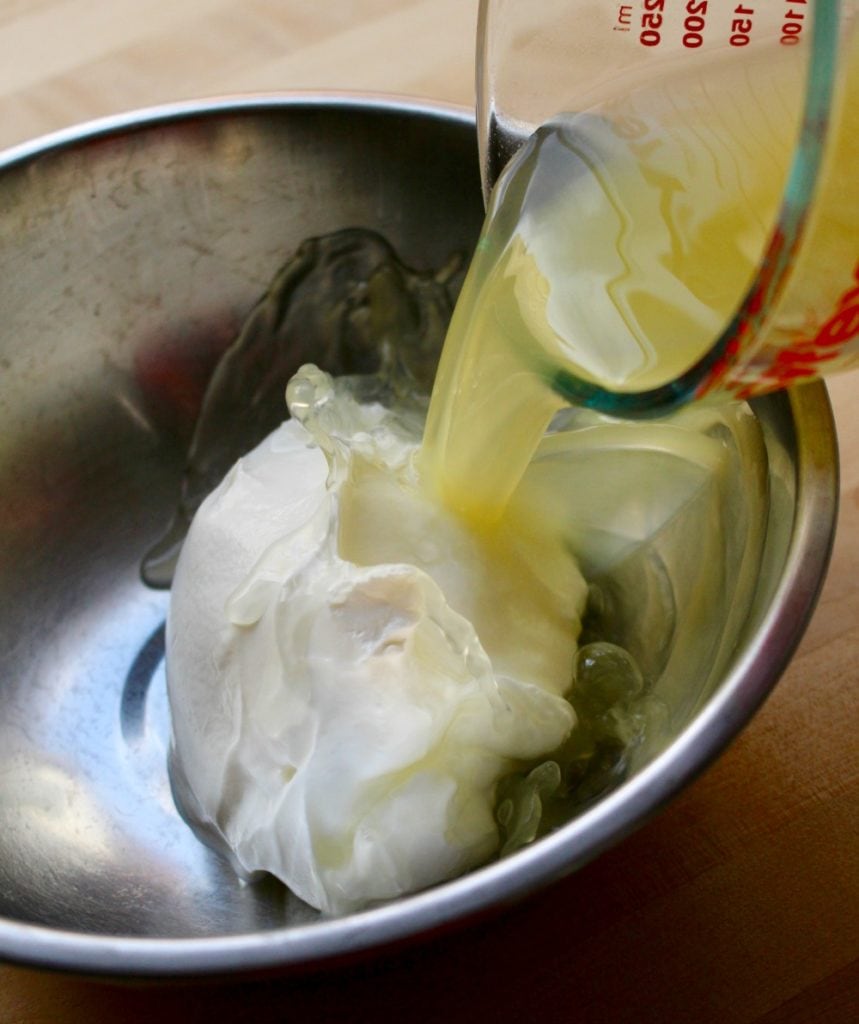 Start by making the creamy dressing. This is sour cream, but you can also use crema mexicana. Some people will even use mayonnaise. That’s so not me! I say NAY-o to Mayo. Personally, I think it tastes better with sour cream.

Get a can, man! This is one case where fresh is actually not better. You will need the juice of 1 can of pineapple. It will help thin out the dressing. See why I like this recipe? You might already everything you need already in your cupboard. 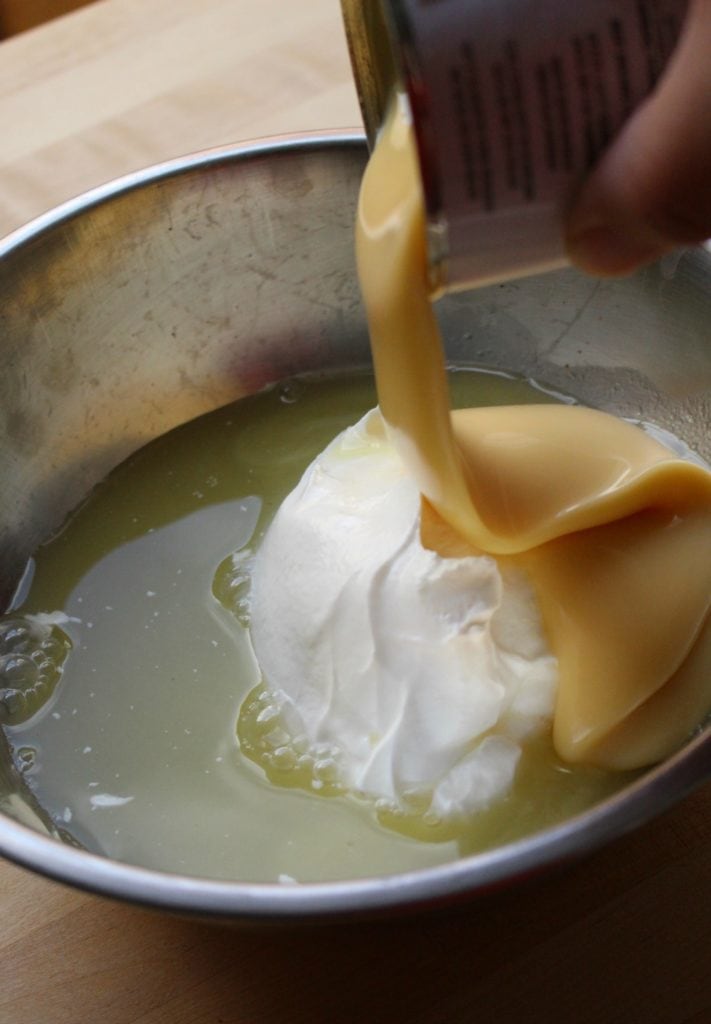 Sweetened condensed milk adds a lot of sweetness. If you like your Ensalada Navideña to be more sugary, by all means add the entire container. This recipe only calls for half of a container. For me, that is plenty sweet. 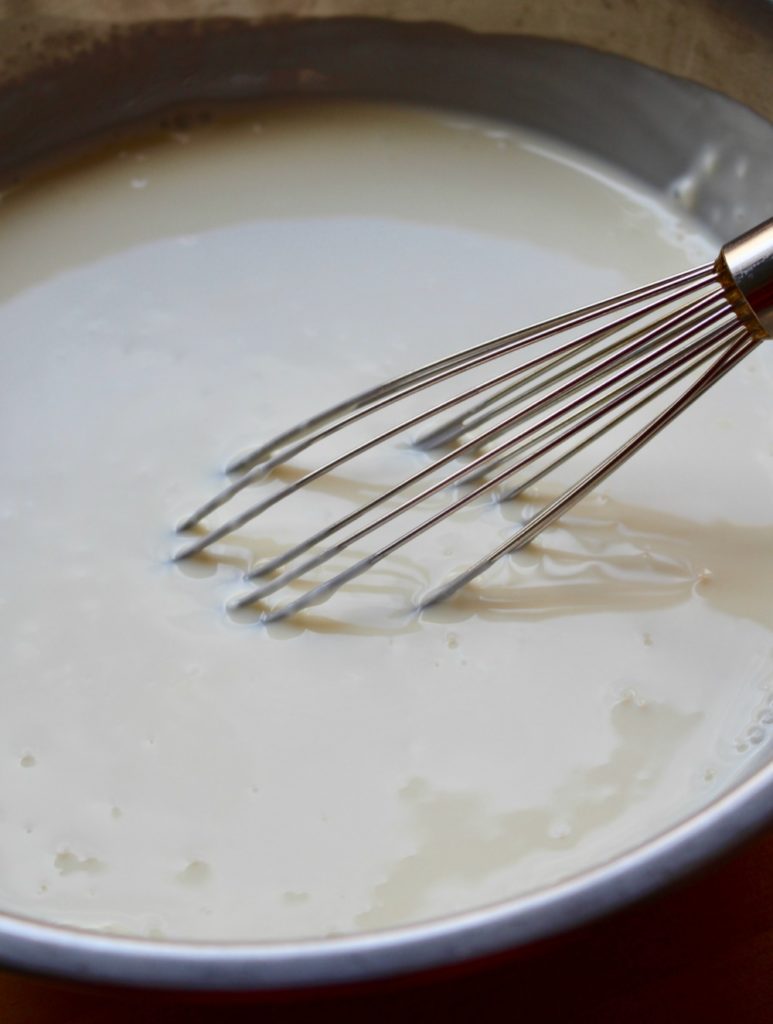 Just beat it! Cue Michael Jackson! There should be no lumps in the dressing. Once you’re done, place this in the refrigerator until ready to us. You don’t want anyone to get sick. By the way, Mexicans love MJ. Then again, who doesn’t? 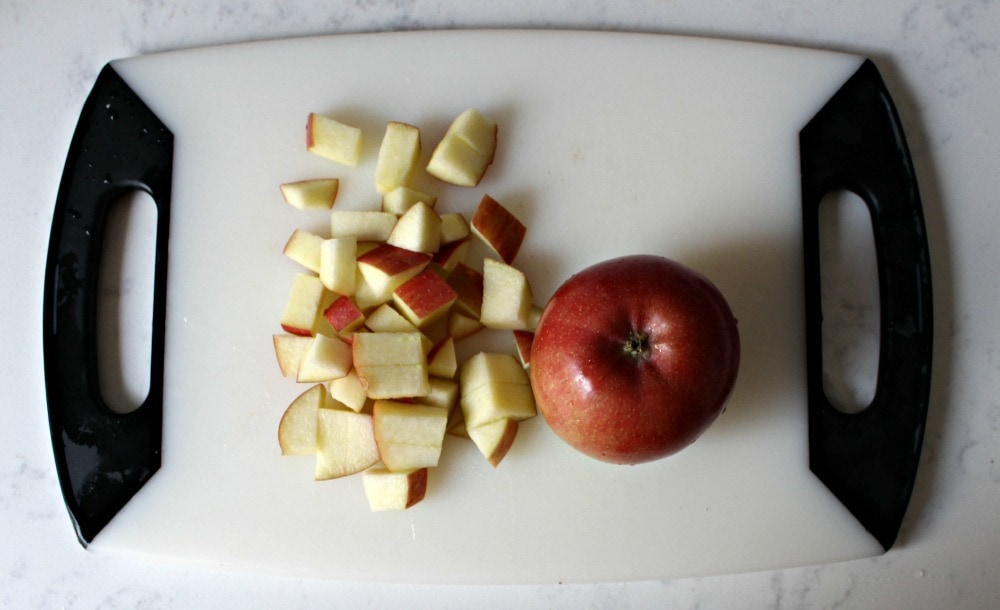 The main ingredient: Apples! Johnny Appleseed took a wrong and probably ended up in Durango. That is where my family has their apple orchards on the ranch. We’re talking acres and acres of Ensalada Navideña waiting to be made. You can use whatever combination you like. For this recipe, I used Gala apples because they were on sale. Chop and dice.

Note: If you don’t want the diced apples to get too brown, put them in water or drizzle them with a little lemon juice while you’re getting everything else ready. 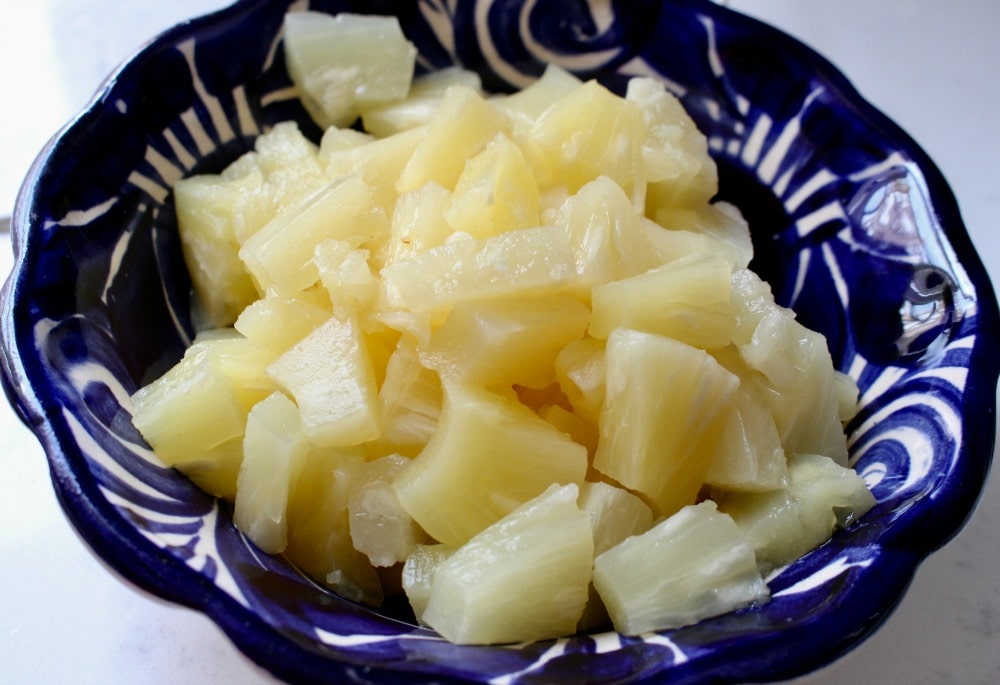 This is canned pineapple. We used the liquid from the can for the dressing, remember? You can use pineapple rings and dice them up. Or buy them already diced. Whatever you get is fine, but don’t get crushed pineapple. That don’t work well in this dish. 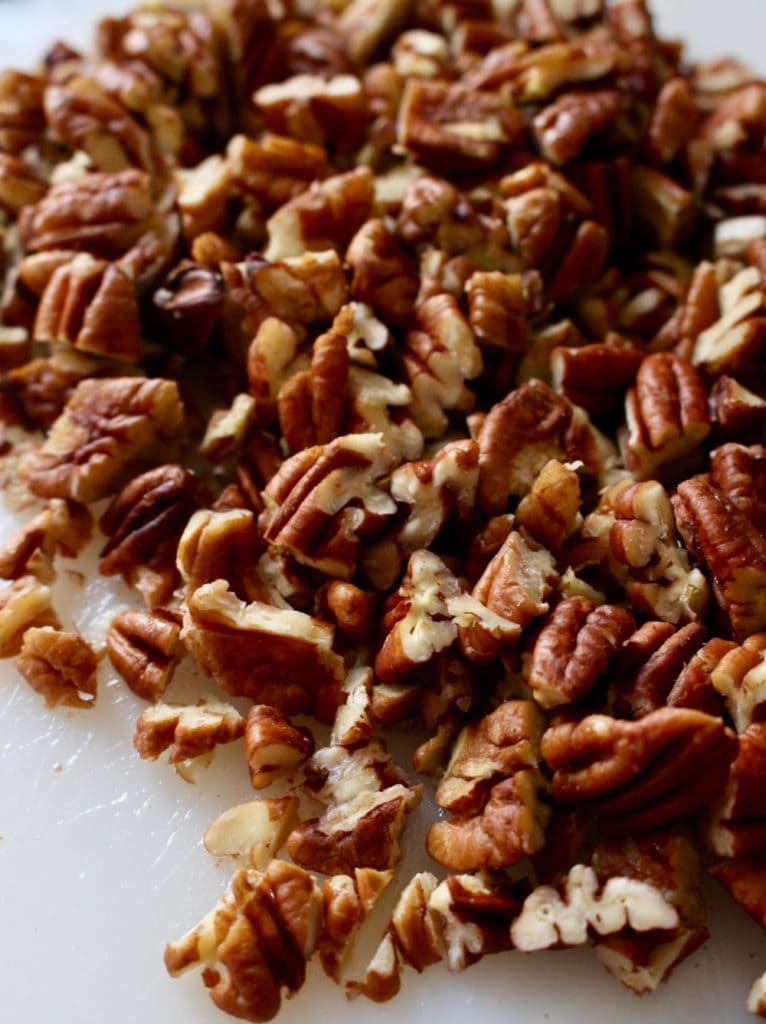 Go nuts! Chopped pecans give great texture to the Ensalada Navideña. You can also use slivered almonds or walnuts, but pecans are traditional. Then again, you always start your own tradition. 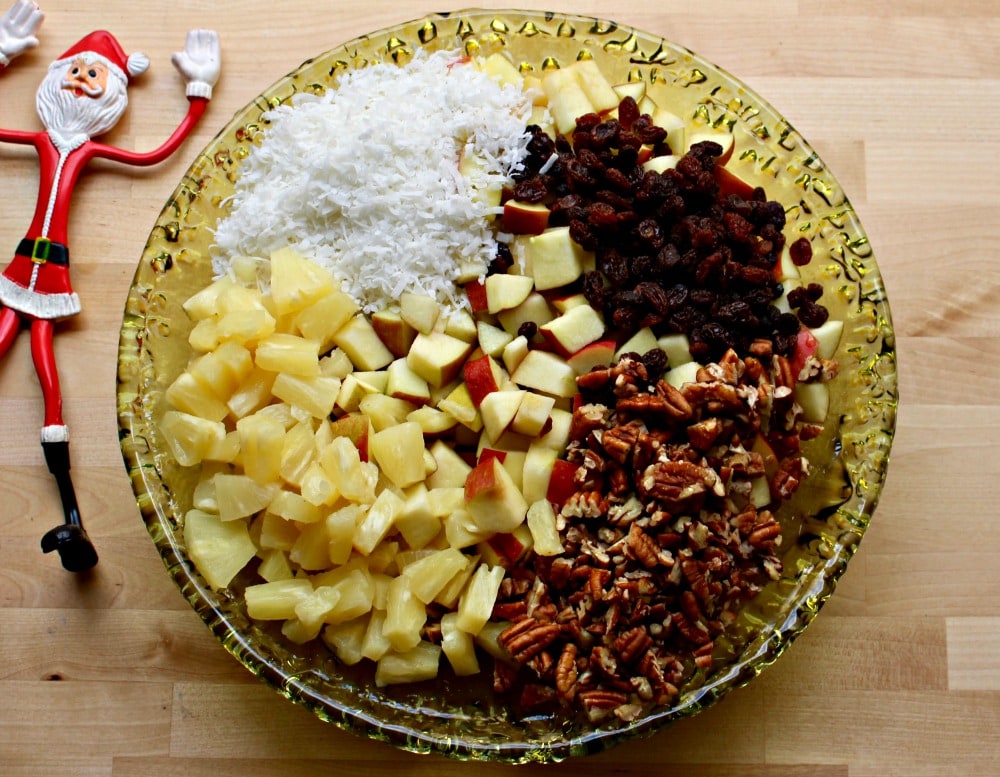 Can’t forget raisins and shredded coconut. Add everything to a large bowl. Isn’t it gorgeous? My friend, Rachel, lent it to me for this picture. Not sure if I got the essence of its beauty, but the antique green glass is something to be seen in person.

Other ingredients: Some people will also add carrots or celery. Those are completely optional and great additions especially since it’s an easy way to get in your servings of fruits and veggies. 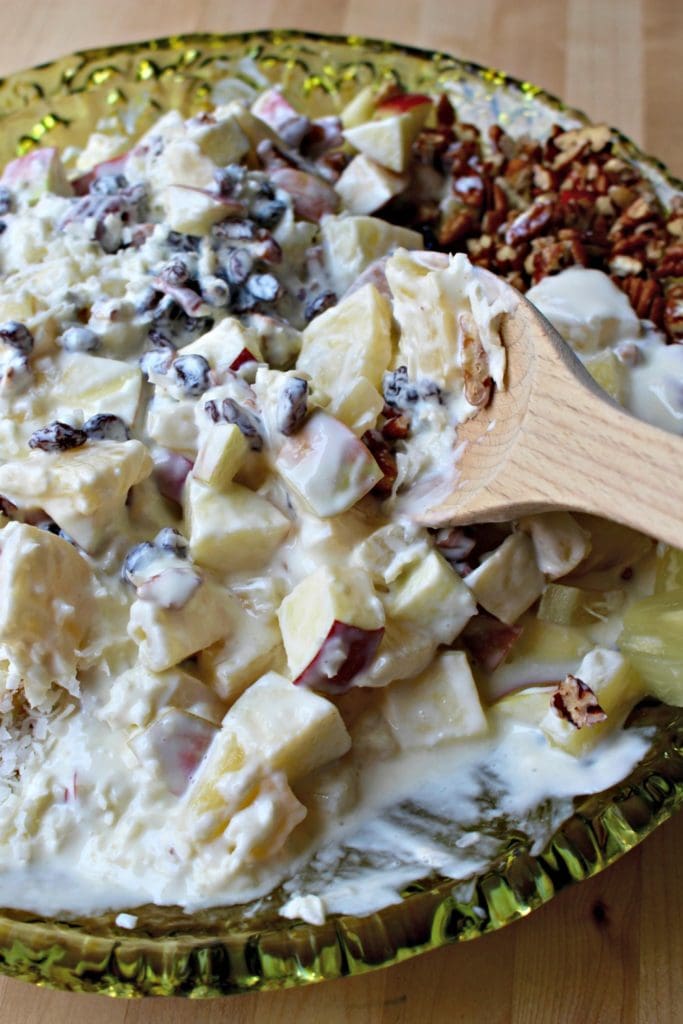 Add the cream dressing to the fruit and mix thoroughly. It kinda looks like a Waldorf Salad. Truth be told, that is how it originated. Over the years, the recipe morphed into a truly traditional Mexican creation in Ensalada Navideña. All cultures steal (borrow) from other cultures. Mexico is no exception.

Finish it off with a cherry on top. Be sure to add plenty of cherries. We used to fight for the cherry as kids. Almost as intense as the battle for the last tamal. That’s when the gloves came off and no holds barred.

Ensalada Navideña is a yummy fruit salad that’s sure to be enjoyed by one and all. Hope you enjoy!

Watch the video to learn to make Ensalada Navideña