This Mexican classic dessert is incredibly decadent, rich, and creamy. Flan is one of those desserts that is hard to resist.
Jump to Recipe Print Recipe

The best way to end any Mexican meal is with a big slice of Flan. Creamy, rich, and decadent. Check out this authentic recipe for this yummy dessert. 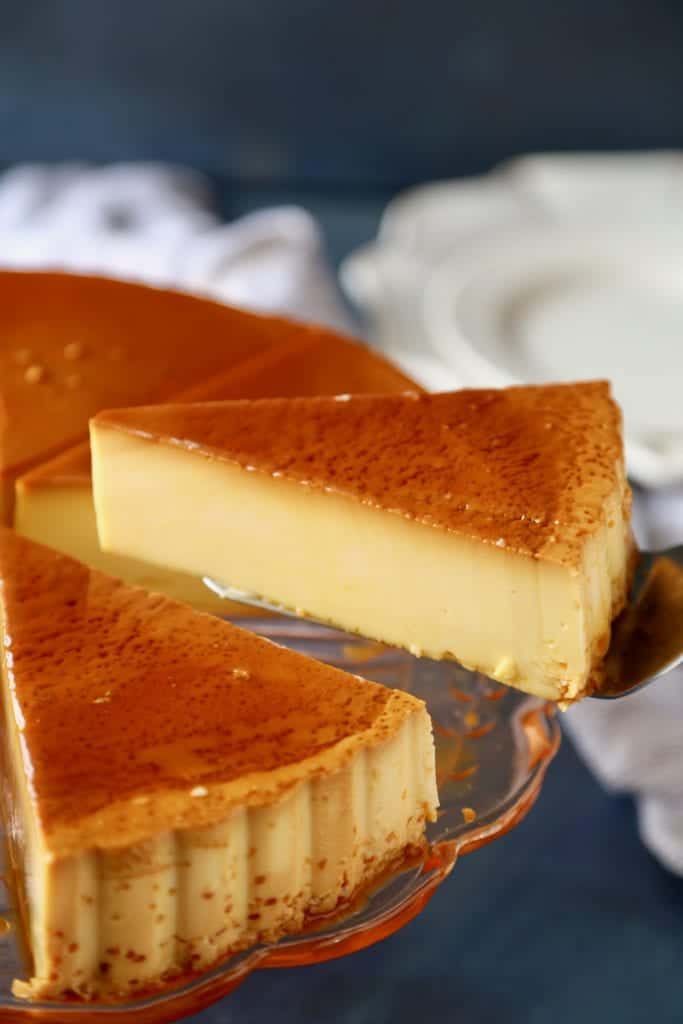 I blame my mother, my abuelita, and all the members of my family.

Yes, they are or were amazing cooks. Even the male members of my family can tear it up in the kitchen …

Well, with the exception of my gringo. He knows how to reheat leftovers (sometimes). LOL.

Whenever I see flan at a party or a restaurant, I have a hard time eating it.

It’s one of those dishes that no one can make better than my family. So, I decided to publish our family recipe. My friends, you are in for a real treat. 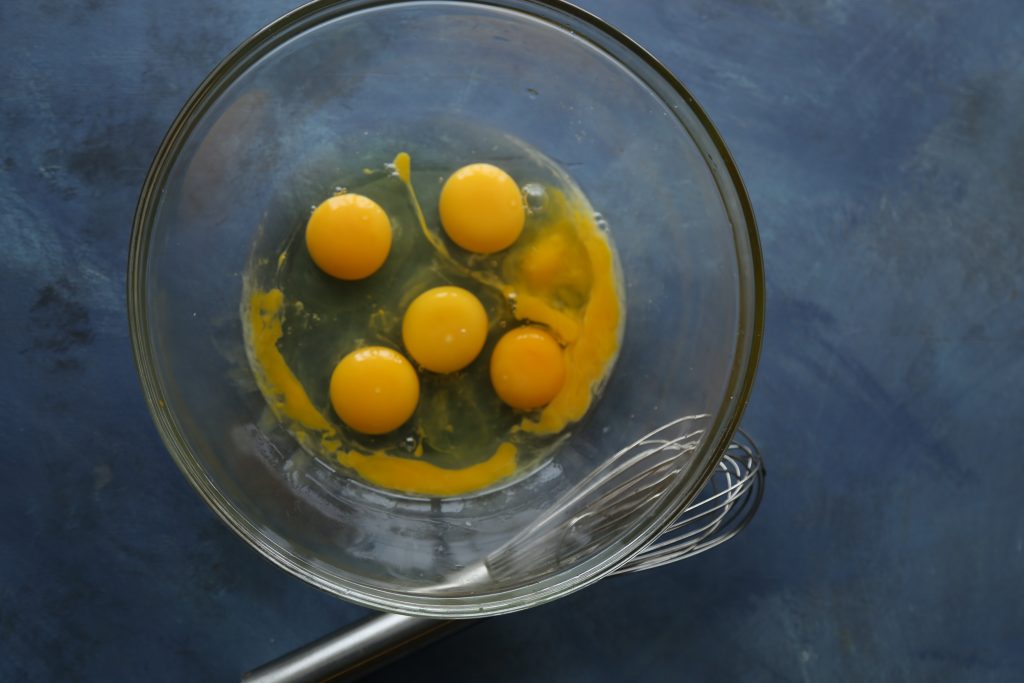 This is an authentic flan recipe has been passed down from generation to generation.

It was given to me by my grandmother, the original Mama Maggie. My namesake.

She told me when she handed it to me that it was handed down to her by her grandmother. And who knows where she got it from …

It’s the baking part, then the long hours, but you have to let it chill in the fridge.

Put the eggs in a large bowl and whisk away. 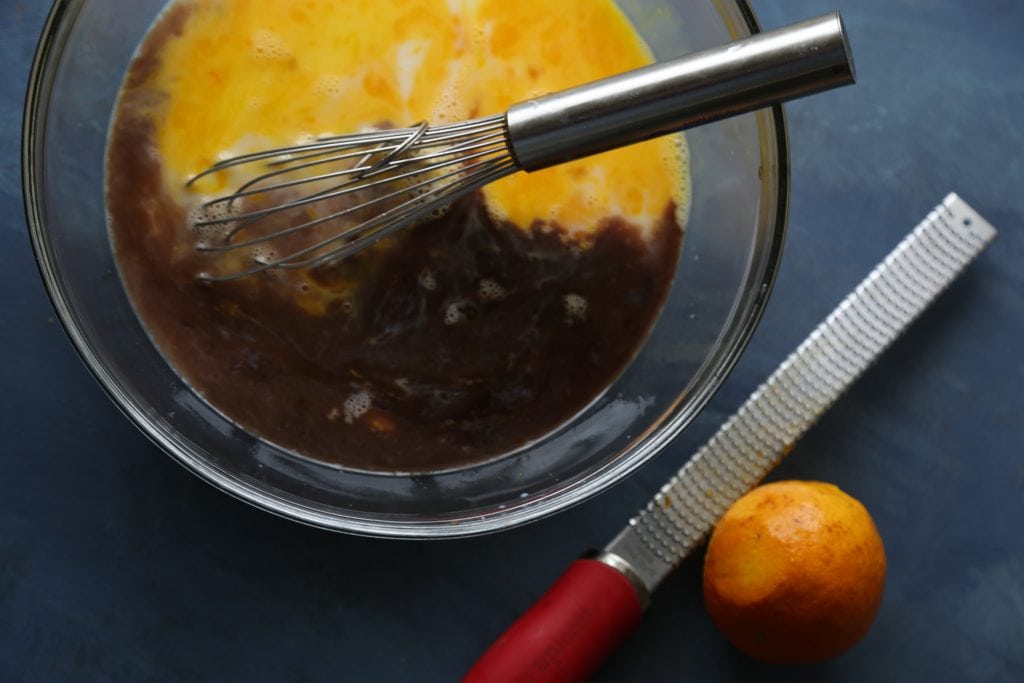 Did you know that vanilla grows native in Mexico?

It’s one of those grocery items that I hardly ever buy in the US. If you’re visiting Mexico anytime soon, buy some vanilla.

It’s a lot cheaper there than anything you’ll find state-side.

Also, I am using whole milk in this recipe. You can also use half and half.

How does flan vary from country to country?

They are very, very similar.

Where in Mexico, we use whole milk (as I am doing here), the islands such as Cuba and Puerto Rico will use sweetened condensed milk or evaporated milk. They lacked fresh foods, and that is why they had to use canned foods.

Nowadays, though, you will see some of their recipes also use whole milk or half and half. 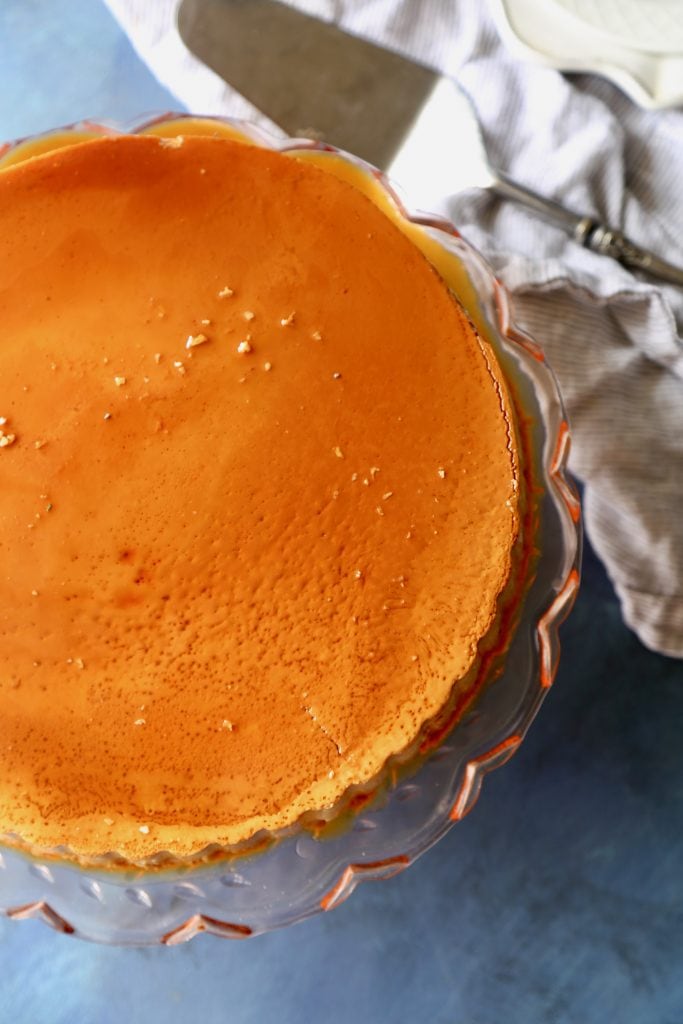 Truth is, I don’t like oranges, but this Mexican flan recipe calls the use of orange zest.

I had way too many oranges growing up, and now, I’d rather eat a well-done steak with a rubbery texture than oranges. CRINGE!

That might be another reason why I’m so picky about my flan.

Some people will even add orange juice to their flan recipe. I’m only adding orange zest.

We just want a hint of orange not a strong “knock-your-socks-off” orange-y flavor.

All are delicious. This Mexican flan recipe is your basic dessert. You can easily change it up according to your taste.

My favorite variation, however, is Chocoflan.

It is incredibly delicious, but it can be hard to make. 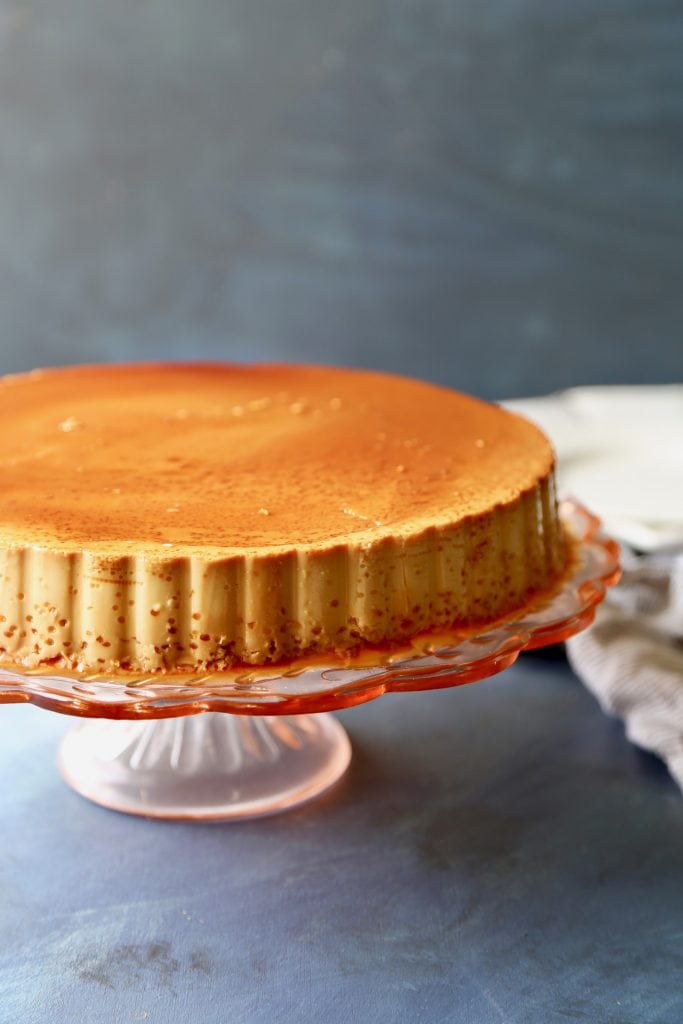 It all goes into the oven for 1 hour then you have to let it cool for 3 hours.

Patience is truly a virtue when it comes to my family’s authentic Mexican flan recipe.

Rich and decadent. Sweet and so hard to resist.

It’s hard to see flan the same way after you taste this recipe! If you try this recipe, you will understand why I’m so picky.

Do you see the picture below, and how the caramel is pouring down the flan? Makes you just want to lick the plate clean!

Are you drooling? Because I sure am!! 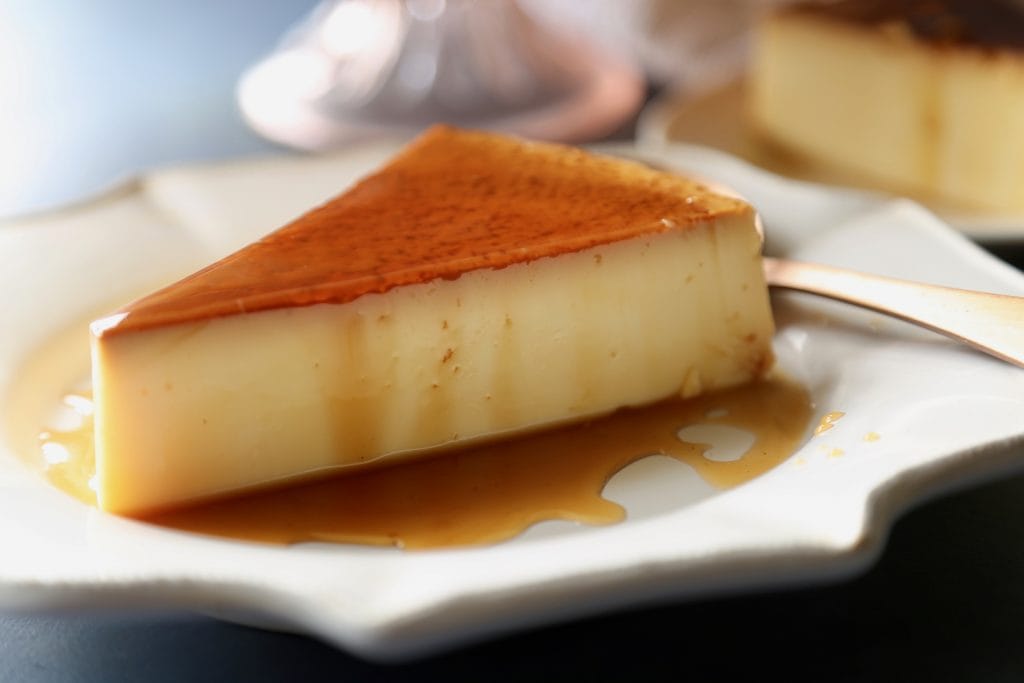 Turns out that Mexican flan is not Mexican at all. Say what?!

I have had people from Spain and France all tell me that we adopted it from their countries. Well, I’m here to set the record straight.

Flan dates back to the Ancient Roman times. You know, Cesar and the Colosseum? Yeah, that!

From there, it spread to Spain, England, France because the Romans conquered lots of lands in Europe.

The Spanish, though, were the first (or so it seems) to add a caramelized sugar top. They brought flan to Latin America, and that’s how we got it in Mexico.

We adapted it in Mexico, and someone in my family perfected it. LOL!

Remember that coconut, vanilla, chocolate, and coffee are all native to Mexico. They added these elements to this dessert and took to an entirely new and delicious level.

I tried to figure out an exact date on my family’s Mexican flan recipe. I can only trace it as far back as the late 1700s. 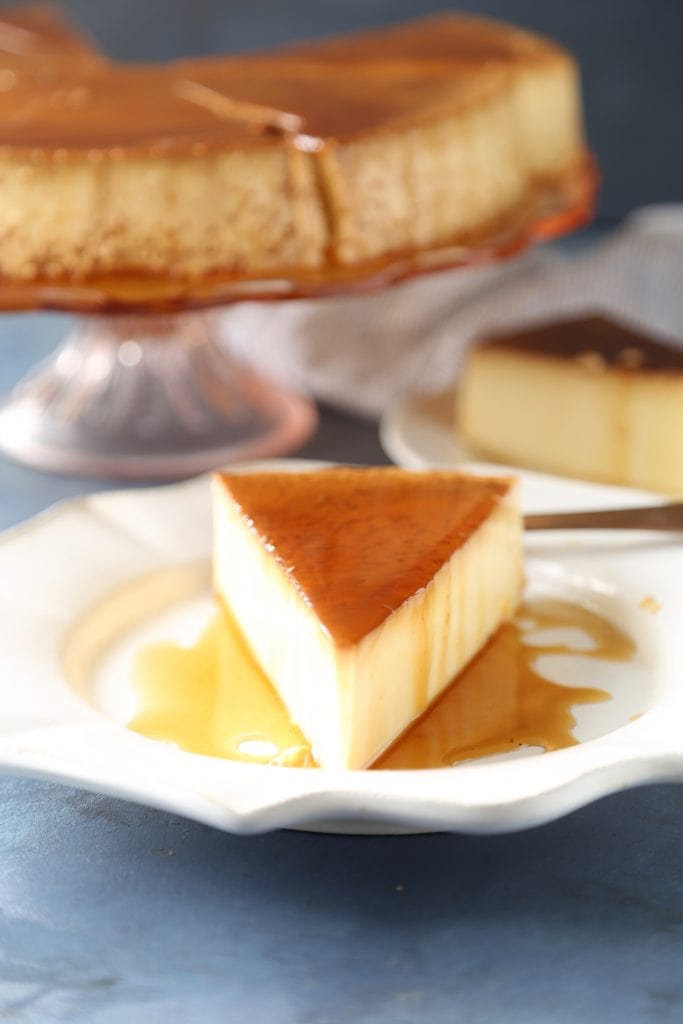 Why am I publishing my family’s Mexican flan recipe?

For my son. He is a ginger redhead with green eyes who speaks Spanish.

He needs a shirt that says “Kiss me, I’m Mexican.” Or, “Faith and Fiestas. We have the luck of the Mexicans.” lol.

I want him to always know his culture, where we came from, our roots.

What better way than through food. Our foods say a lot about us, who we are, where we have been, where we’re going.

Traditions and family are everything to me and my family.

I know that my grandmother would have loved for me to share this recipe with you. She was a magician in the kitchen.

I have several of her Mexican dessert recipes up on this blog. Champurrado, Buñuelos (or Mexican Fritters), Capirotada (Mexican Bread Pudding), Tres Leches Cake, and more.

Hope you enjoy! If you make this recipe, please tag me. I’d love to see it! 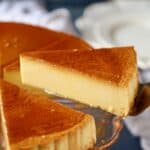 Chill for at least 3½ hours. Overnight is best.  When you flip the pan, slowly remove the platter. Allow the flan to come down, or it can crack.