Aguachiles is made up of juicy, succulent shrimp marinated in a delicious and spicy green chile sauce. Light and full of bold flavors. This Mexican food classic will impress your guests and delight your palate.
Jump to Recipe Print Recipe 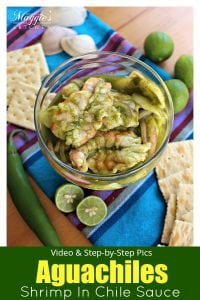 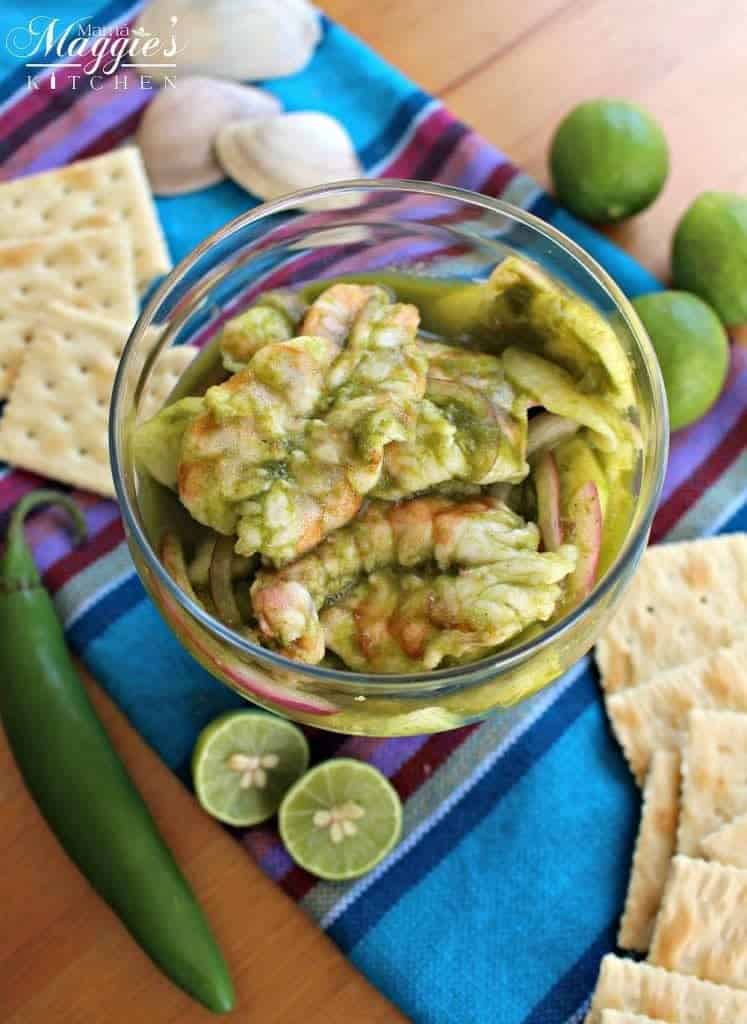 Aguachiles. Just the thought of it makes me go .. YUM!! Mexico is surrounded by water. Our seafood dishes are incredible, OMG, mind-blowing, ah-mazing!! Humbly speaking, of course. This dish is no exception. 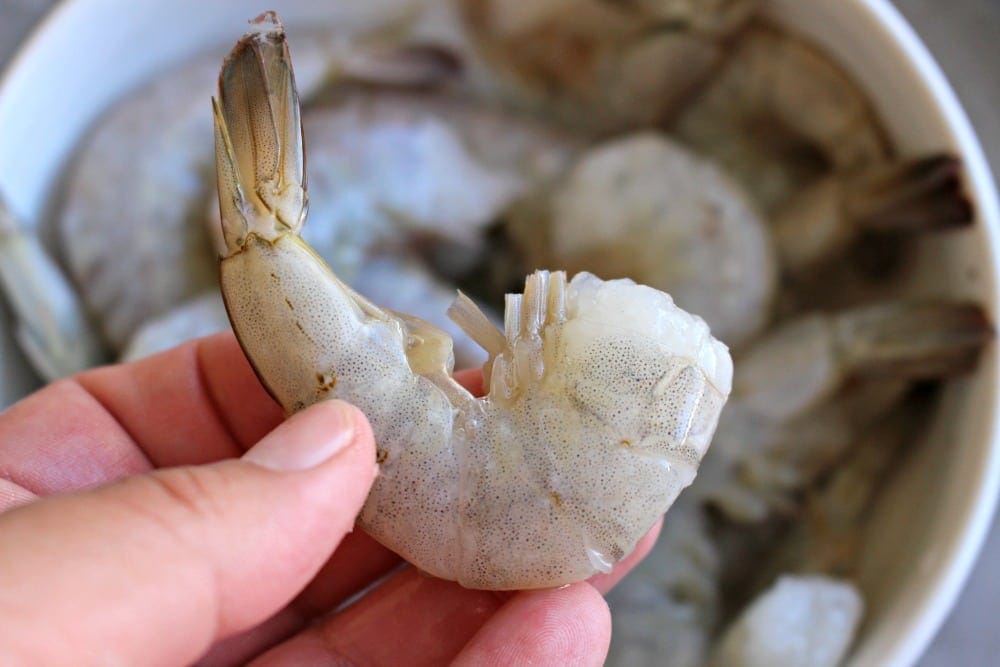 How to Make Aguachile

You start with fresh raw shrimp. I used Jumbo shrimp, but you can use whatever size you like. I find that using larger shrimper saves time in the cleaning process.

Note: This is “Aguachile de Camaron,” or shrimp. There is such a thing as Tuna Aguachile which is basically the same thing, but swap out the shrimp for tuna fish. 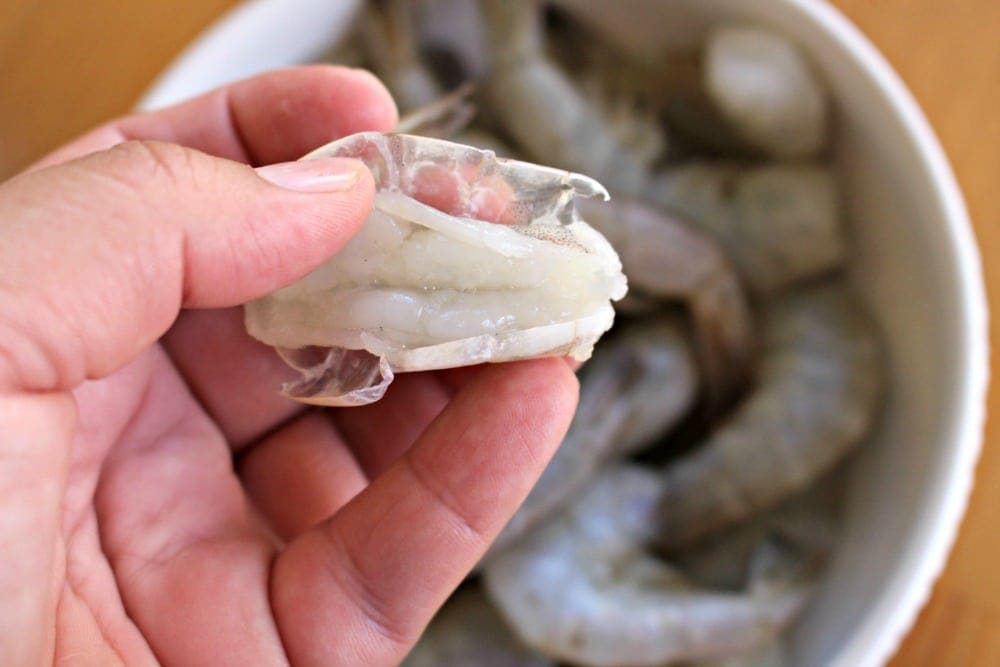 I hate cleaning shrimp, but it has to be done! If you buy shrimp with the poop tract inside, remove it. No one likes a poop eater. Ha!

Pro Tip: Buy shrimp that have already been cleaned. It will save on time. They cost more, but it’s totally worth the price. 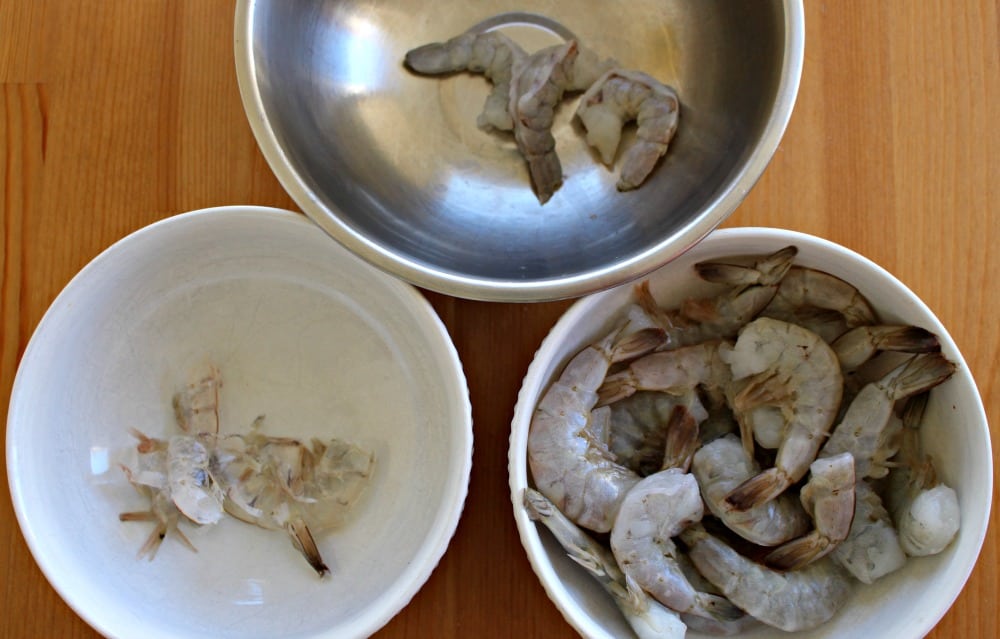 Be sure they stay cold. You do not want to make anyone sick.

What’s the difference between Aguachiles and Aguachile?

Nothing. It’s the same dish.

People say “aguachiles” as in plural because a lot of shrimp are used.

Others will say “aguachile” as in singular because they are referring to the water. Water is singular in this case. 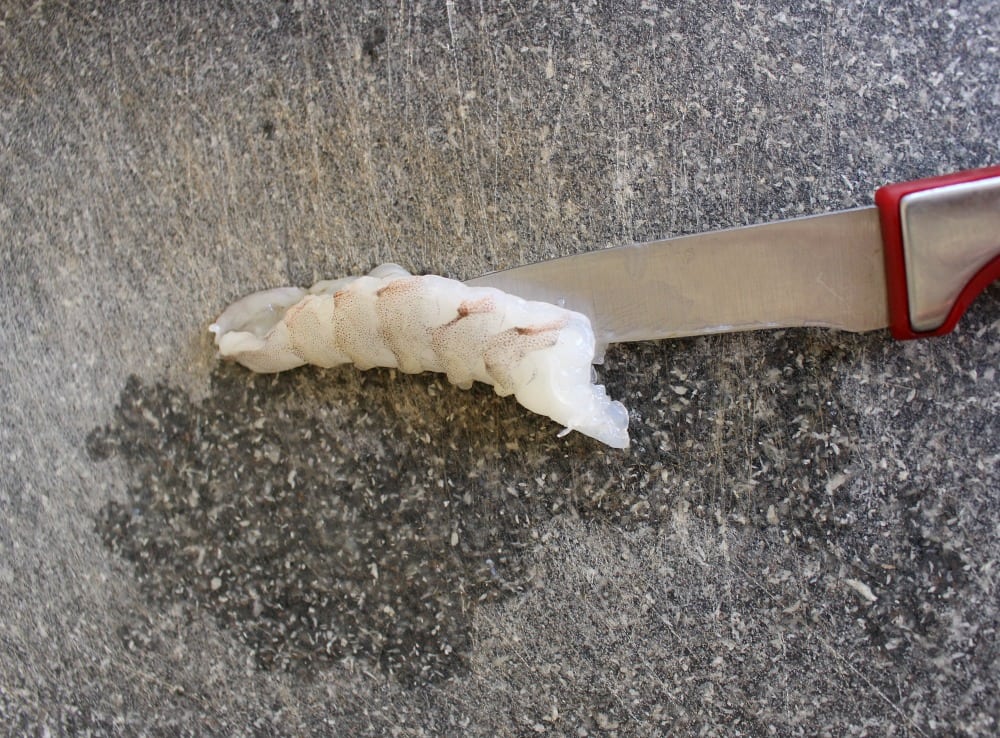 You can leave the shrimp whole. Or, chop into tiny pieces. I prefer butterflying the shrimp open.

What is the Difference between Aguachile and Ceviche

One big difference is that when making Ceviche, it takes time to marinade the seafood.
Aguachile is tossed in the marinade for a few minutes then served shortly thereafter. 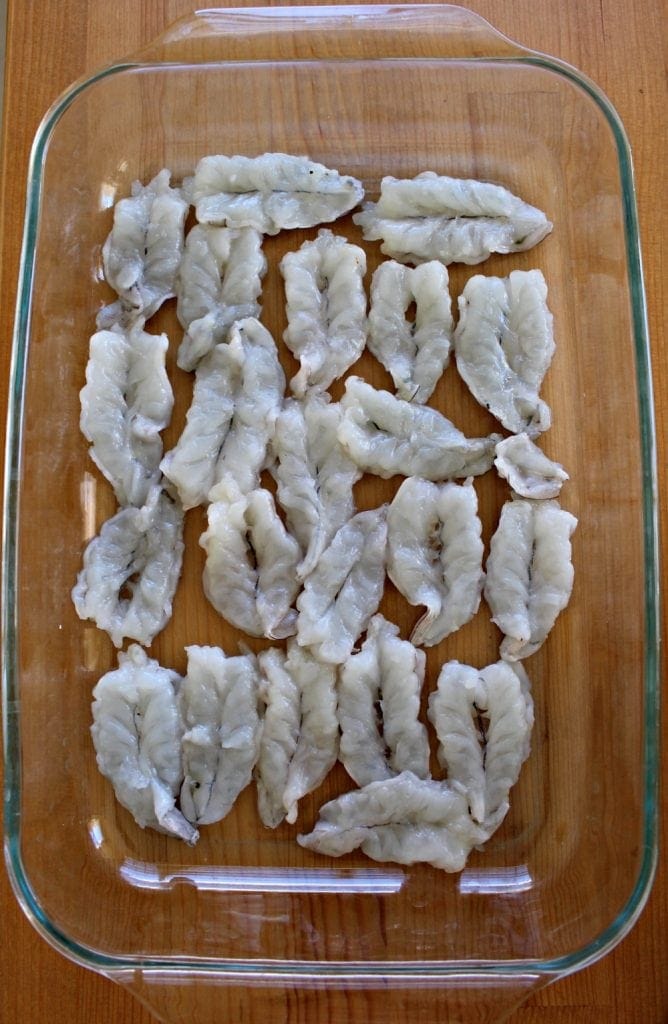 They look bigger for some reason when they are butterflied. Place in a large Pyrex plate and set aside.

Technically, it is not cooked. For something to be cooked, there needs to be heat involved.

Ceviche is not cooked, but it is not raw either.

When making aguachiles and ceviche, the seafood undergoes a process called “denaturation.” The lime marinade chemically “cooks” the seafood, making it safe to eat.

It may seem foreign to many Americans, but preparing seafood like this has been around for hundreds of years. 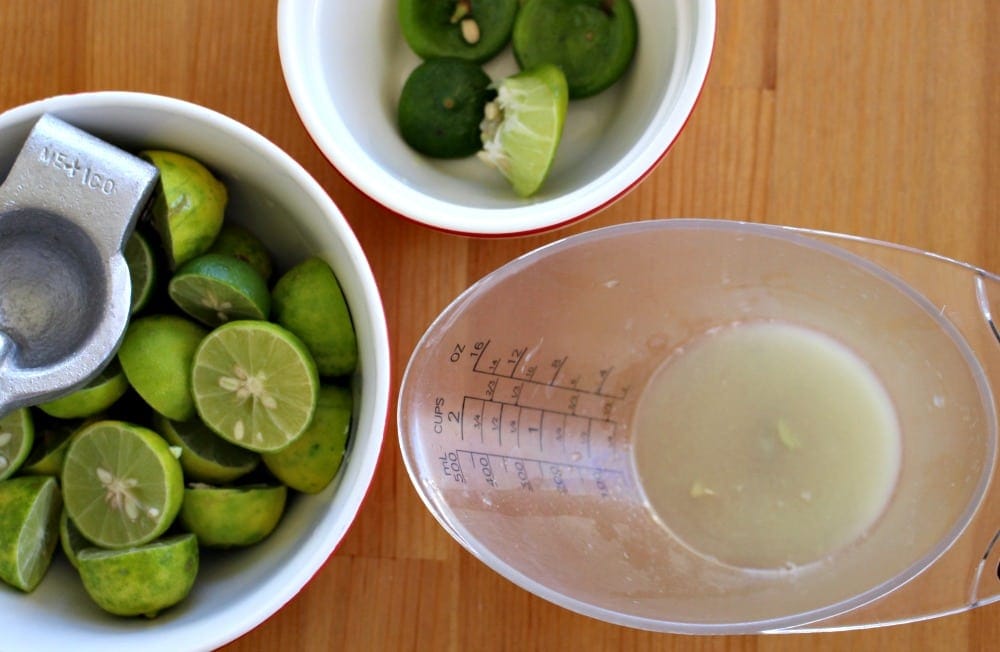 Lime. Lots and lots of lime is needed for the marinade. In Mexico, we primarily use key limes for our dishes.

You’re going to need 1 1/2 cup of lime juice. If you don’t have enough limes, you can substitute with white vinegar.

To use key limes, double the amount of limes. That is, 2 key limes for 1 lime. 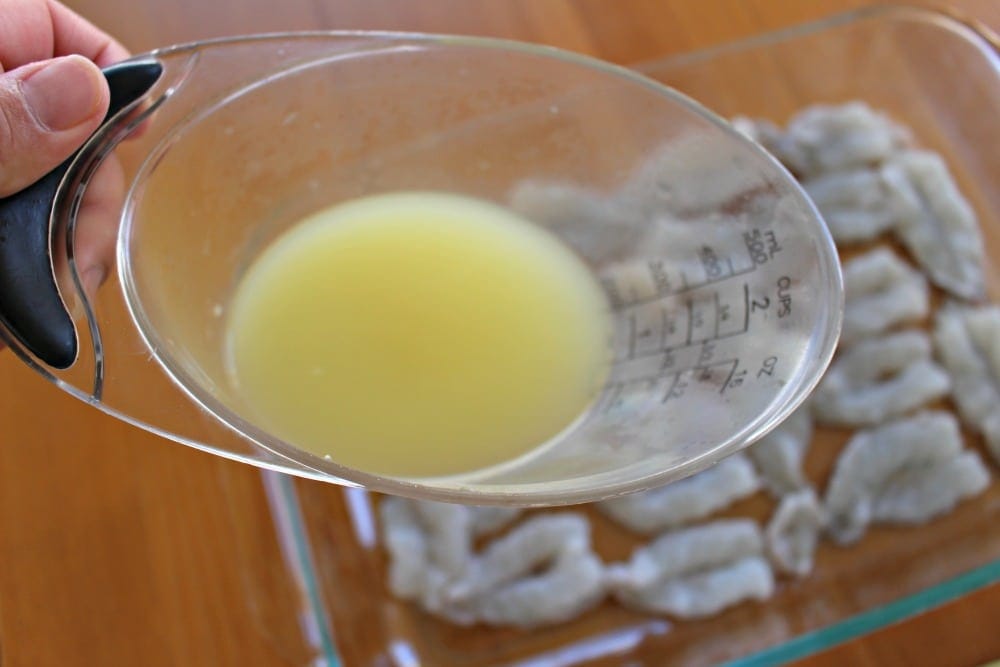 If you are not 100% convinced about “cooking” the shrimp in lime, here are some other things you can do:

In both cases, the shrimp will start to turn pink. 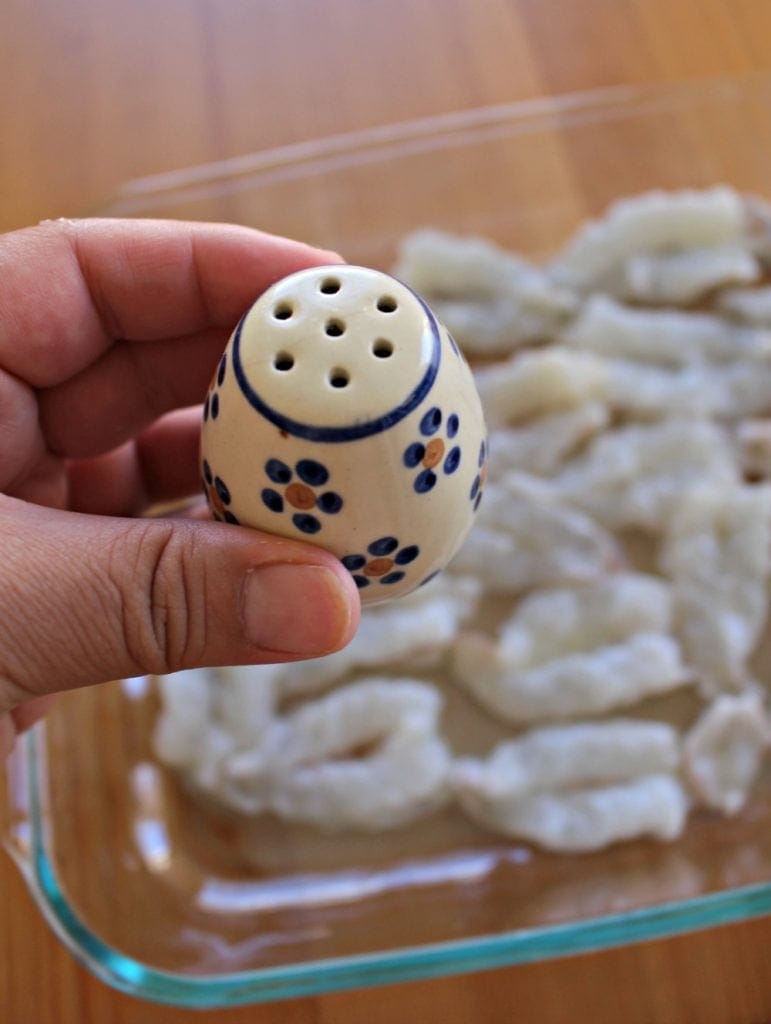 Not too much. You never want to oversalt your food.

Then place the Pyrex dish in the refrigerator while you’re making the Aguachile sauce.

Do not leave the dish outside. The shrimp will go bad if they are outside of the refrigerator for too long. 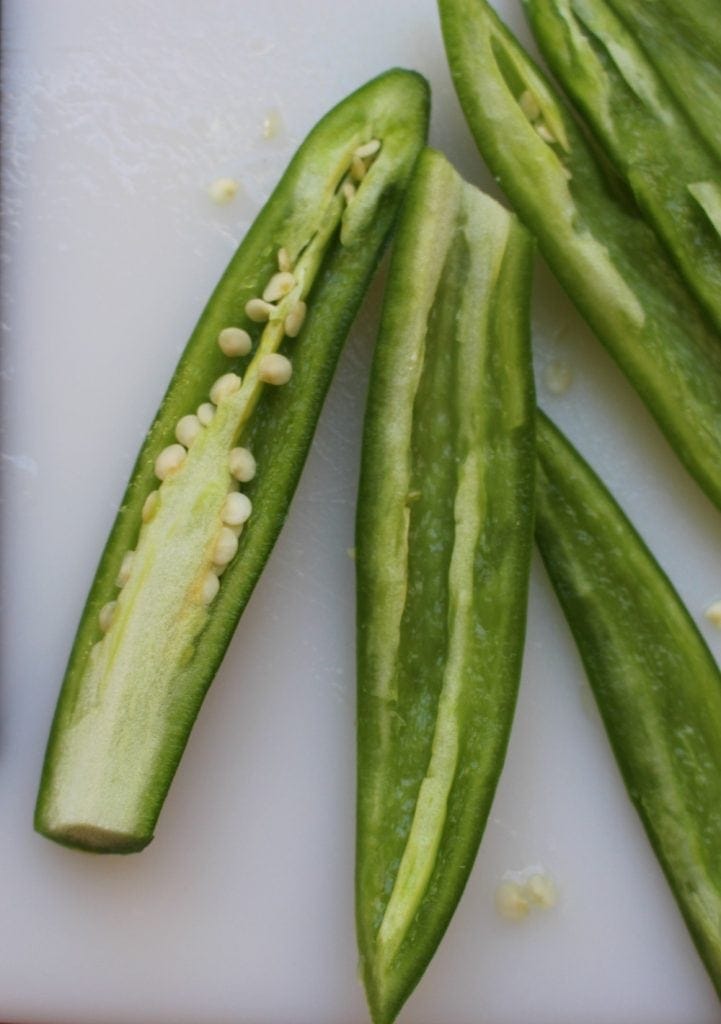 Traditionally, we use serrano peppers, but some people have a hard time finding serranos so they will use jalapenos instead. It’s perfectly ok and very common to swap out the two peppers.

This recipe is Aguachile Verde – in a green sauce. There other versions of this dish: Aguachile Rojo, Aguachile Negro, and Aguachile Mango. The difference is that each use different chiles.

Aguachile Verde marinated in green sauce is the most common. 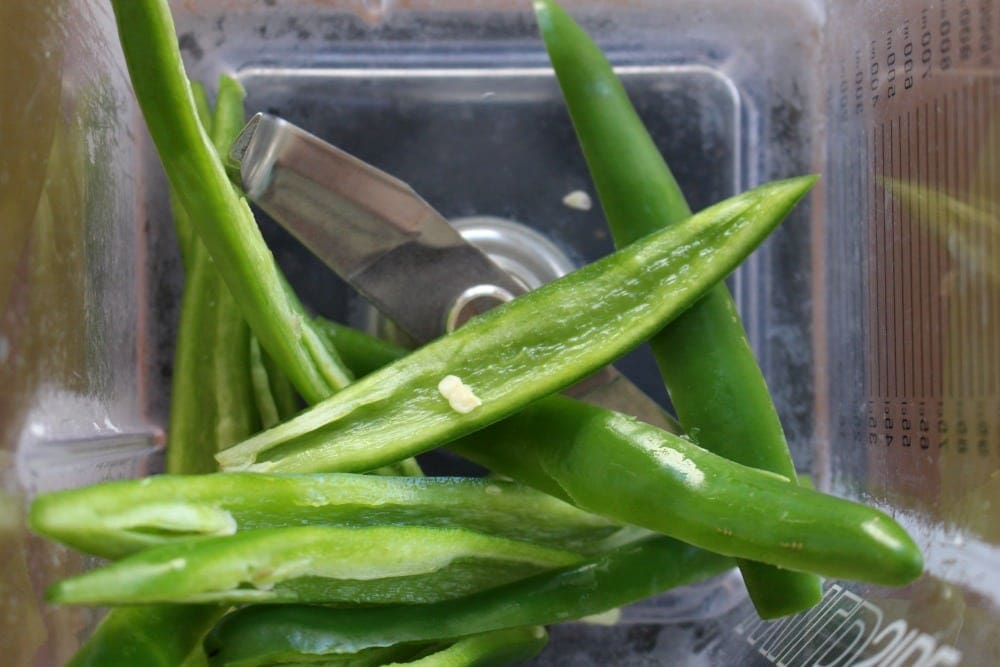 You’re not a wimp if you don’t like spicy shrimp. For a less spicy sauce, use jalapeno instead of serrano pepper. 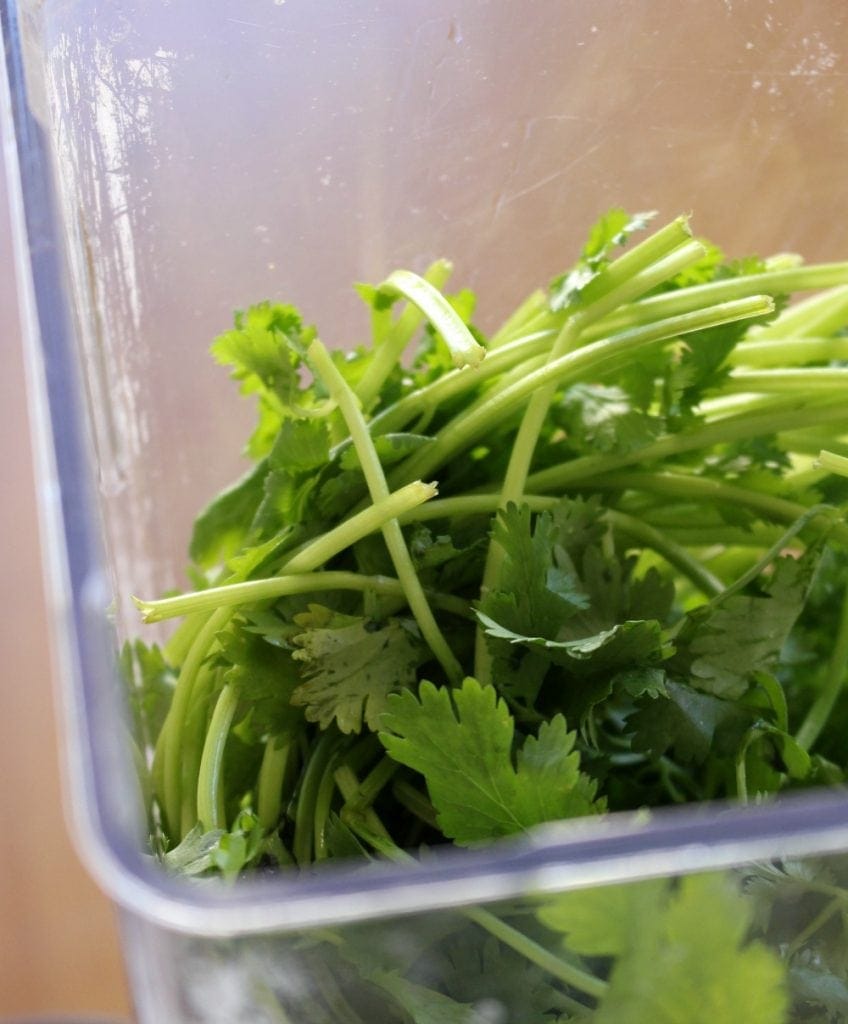 I like the herby taste. That’s why I’m adding the stems. If you don’t like it, just use the cilantro leaves and chop off the stems. 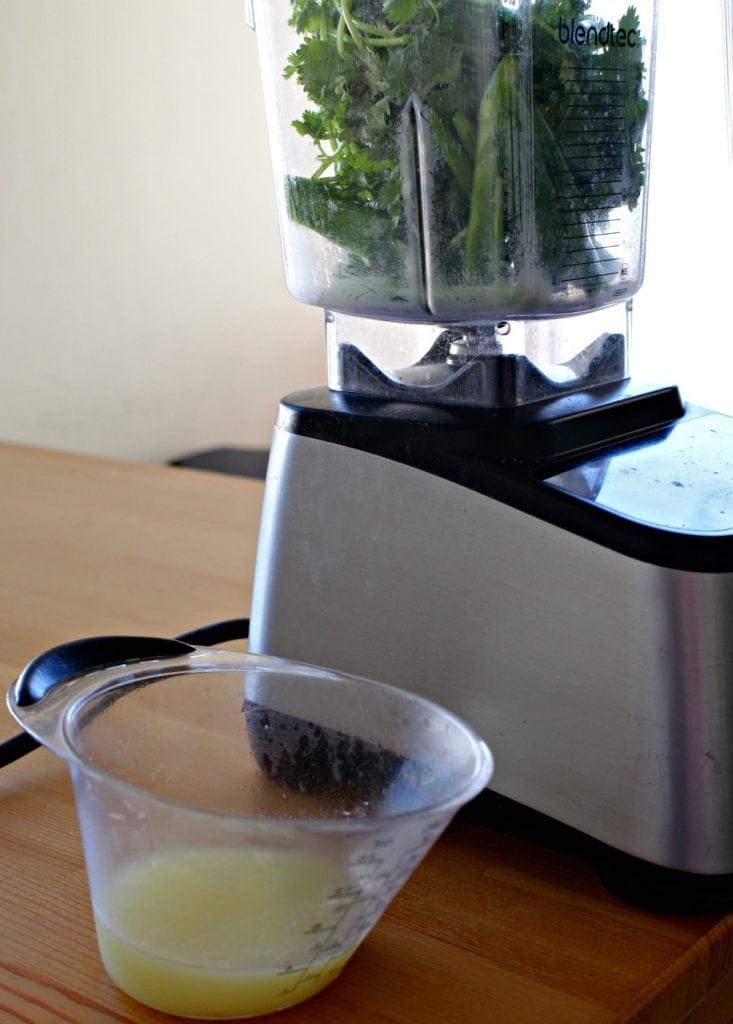 Do not confuse this with Salsa Verde. There are no tomatillos used to make the marinade for Aguachiles Verde. 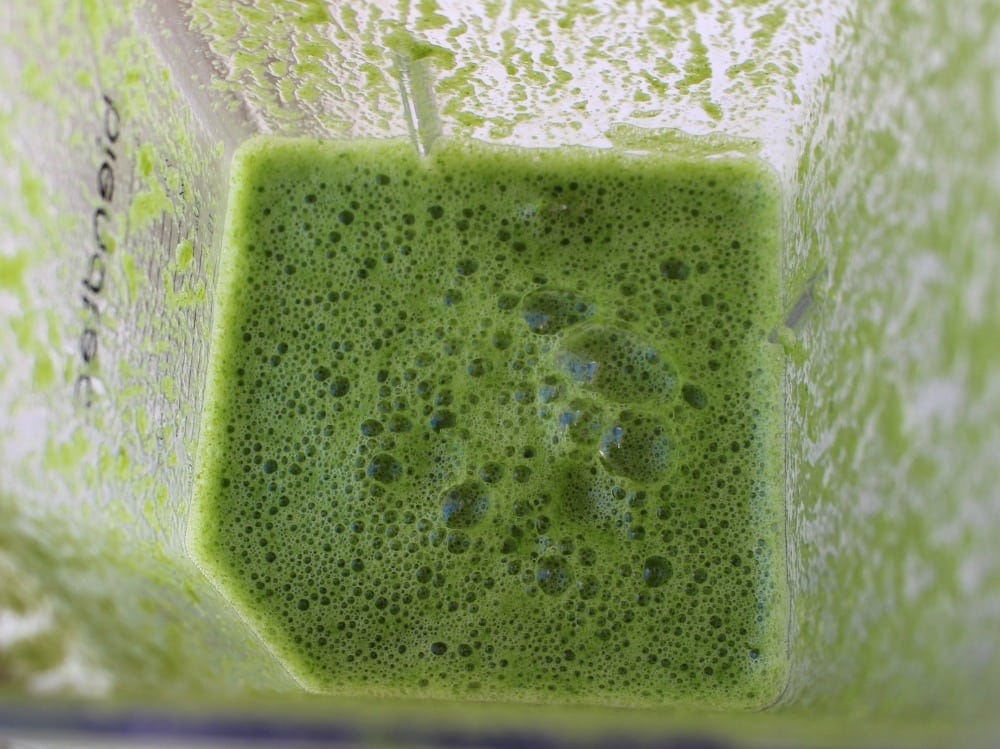 How long does Aguachile last?

Whenever seafood is cooked in acid, the texture will degrade. 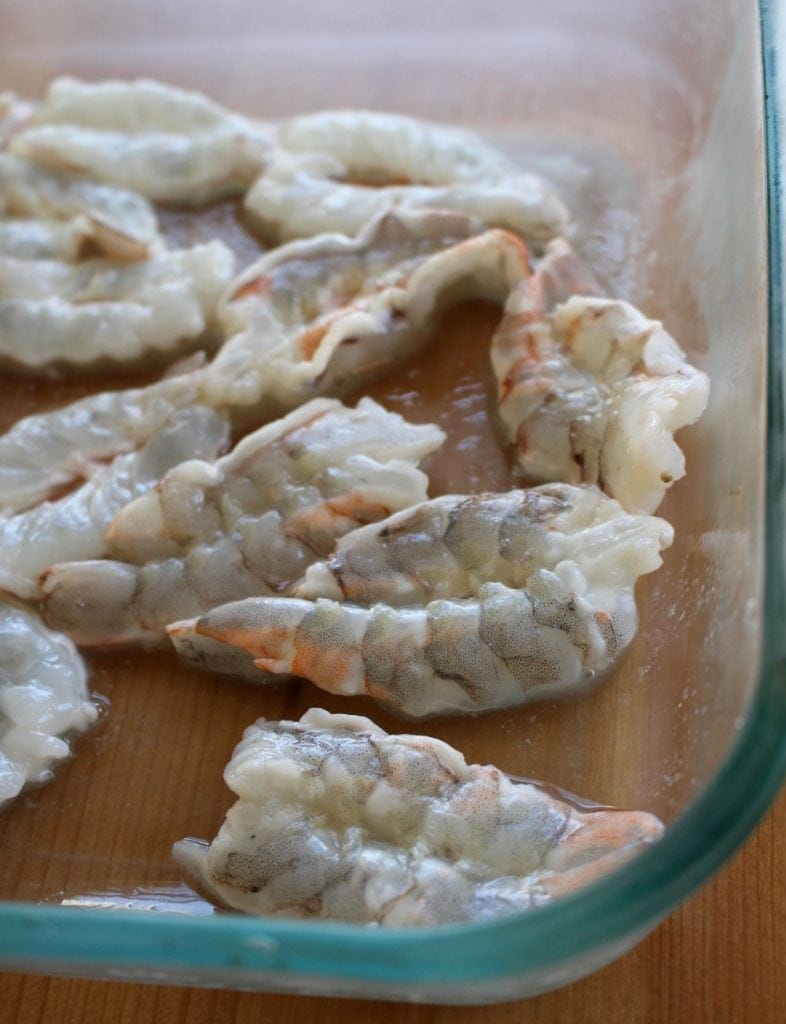 See how they are already turning pink? This means that they’re cooking. It’s exactly what we want! 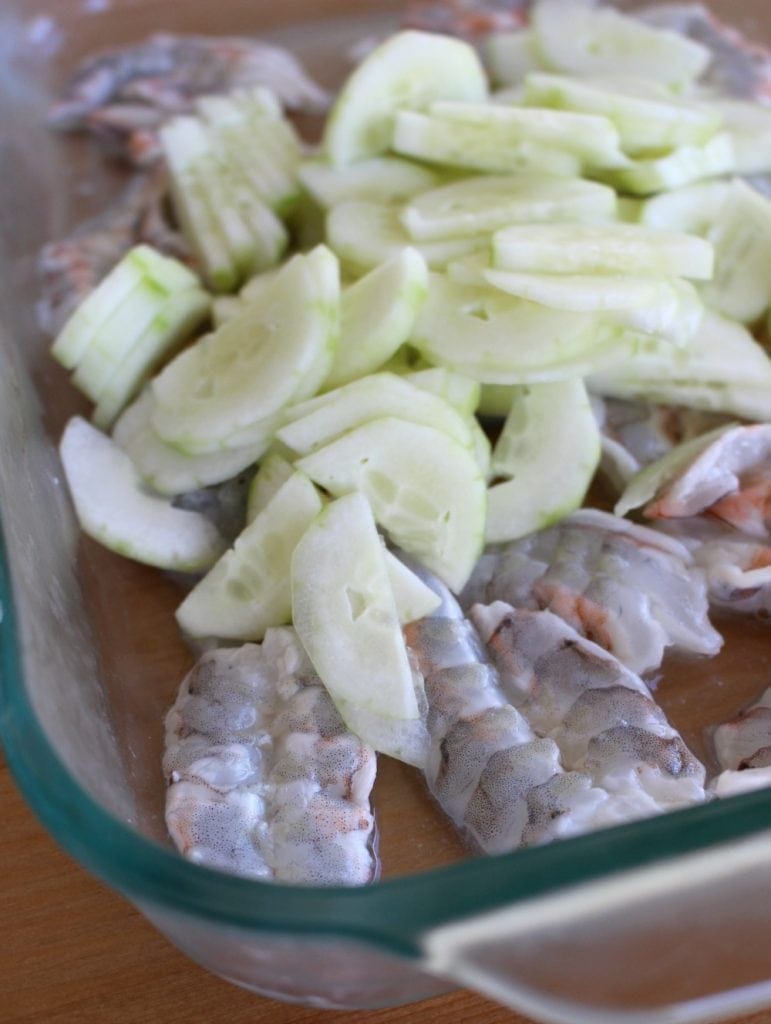 I’m only using one whole cucumber, but you can add more or less depending on your taste. 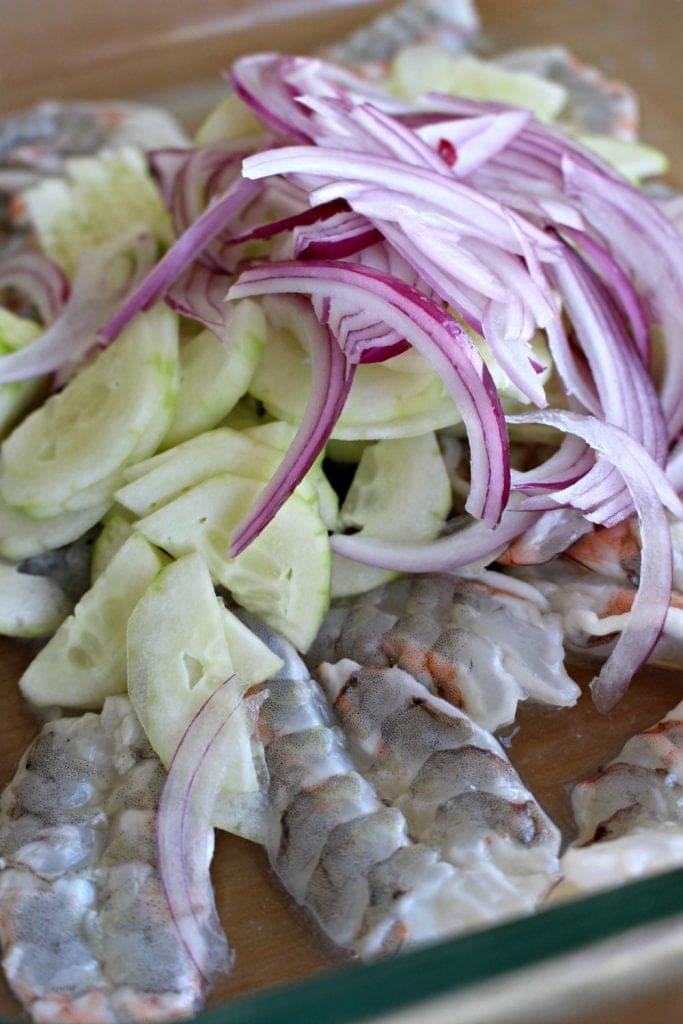 Red onion is traditional, but you can also use white onion. It will somewhat pickle with the sauce.

Or you can use already pickled onions. 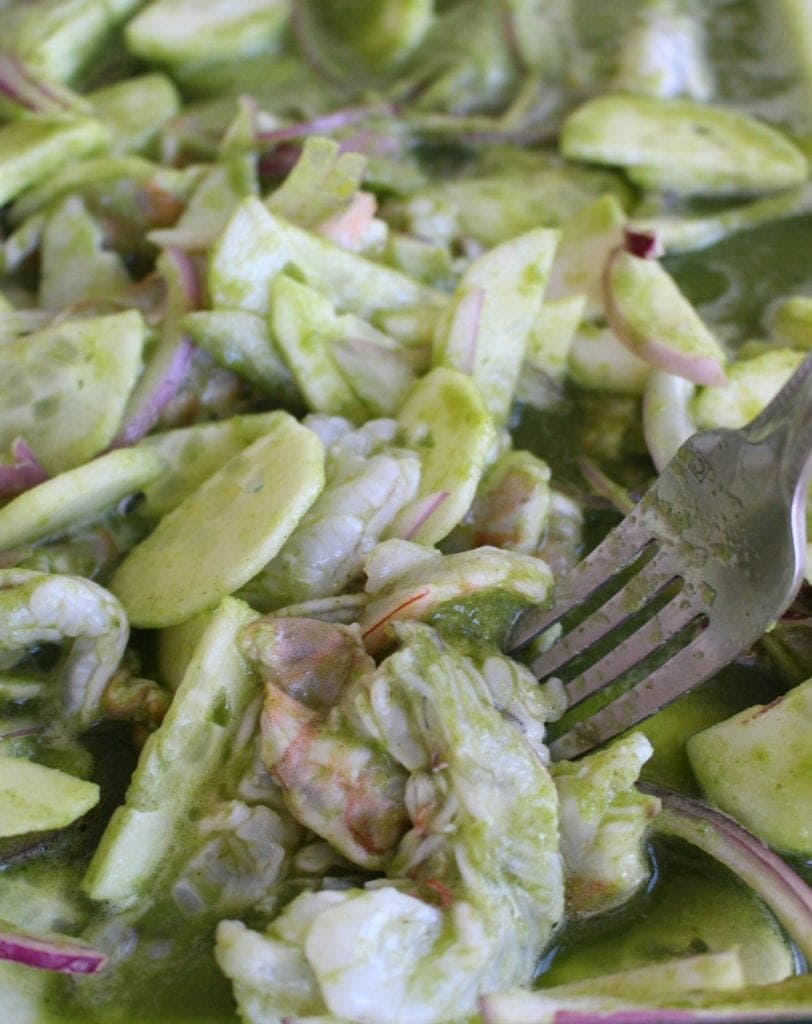 It’s a very simple recipe and perfect for entertaining. A true Mexican food favorite from the Pacific coastal states. 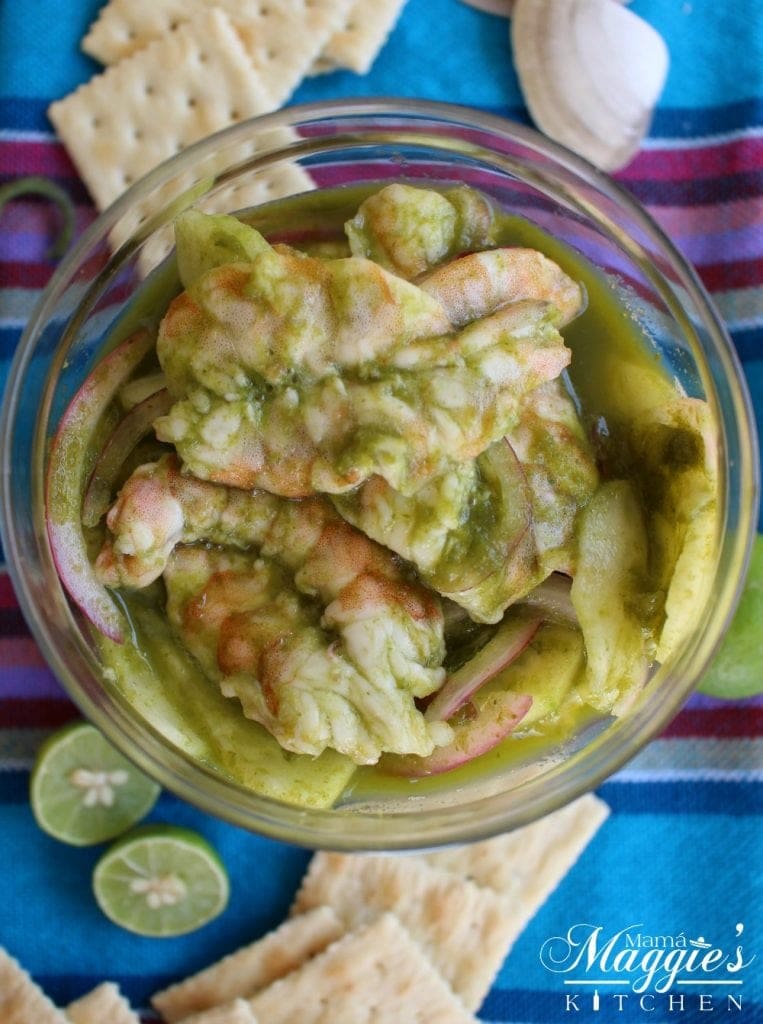 What to Serve with Aguachiles?

Aguachiles makes a tasty and flavorful light lunch. Serve with saltines, avocado slices, or on a tostada. If you are serving it as a meal, try arroz blanco and simple green salad.

It also goes well with Cucumber Lime Agua Fresca. For those of you over 21, you might consider serving this with Cucumber Gin Cocktail. Hope you enjoy! 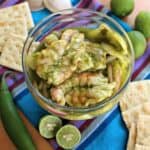 Buy shrimp that have already been cleaned. It will save on time. They cost more, but it’s totally worth the price. Best way to thaw shrimp is to overnight in the fridge. Or, place the shrimp in cold water for 15 minutes. When making aguachile and ceviche, the seafood undergoes a process called denaturation. The lime marinade chemically “cooks” the seafood, making it safe to eat. Next time you’re at a grocery store, compare prices. Key limes tend to be cheaper than regular limes. Use 2 key limes for 1 lime.  If you are not 100% convinced about “cooking” the shrimp in lime, here are some other things you can do: If you can't find serrano peppers, you can use jalapeños.  Remove the stems from the cilantro, leaving only the leaves for a less herby flavor. Whenever seafood is cooked in acid, the texture will degrade.