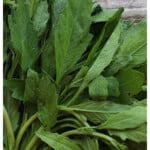 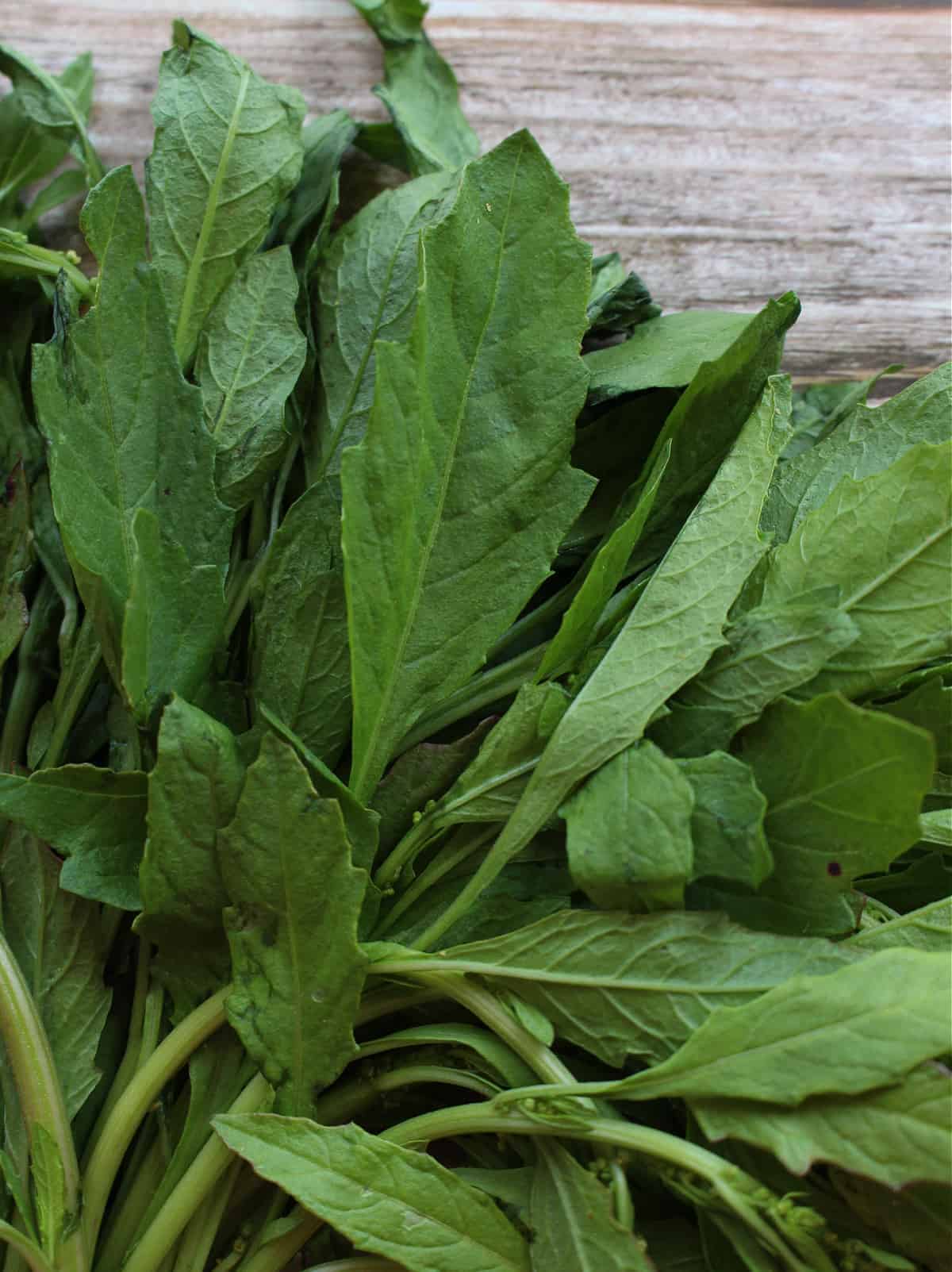 What is Epazote and How Do You Use It?

Epazote is one of those plants that you see in the Mexican grocery stores and wonder “What is this and what do I do with it?”

Epazote has both a strong aroma and taste so not everyone is immediately in love with it. However, it’s very traditional in Mexican cooking and can admittedly be a bit of an acquired taste.

Epazote adds its own unique, somewhat rustic layer of flavor to a variety of recipes. Although the dried form can be used, fresh epazote is by far the best. Peak season is winter but it’s often available all year long.

With its long dark green jagged leaves, epazote can often grow to be 4-foot high. It has small green flowers which produce tiny seeds in the thousands.

Surprisingly, it’s totally ok for vegetarian, vegan, gluten-free, and paleo diets. But most people consider it an essential ingredient in traditional Mexican cooking. 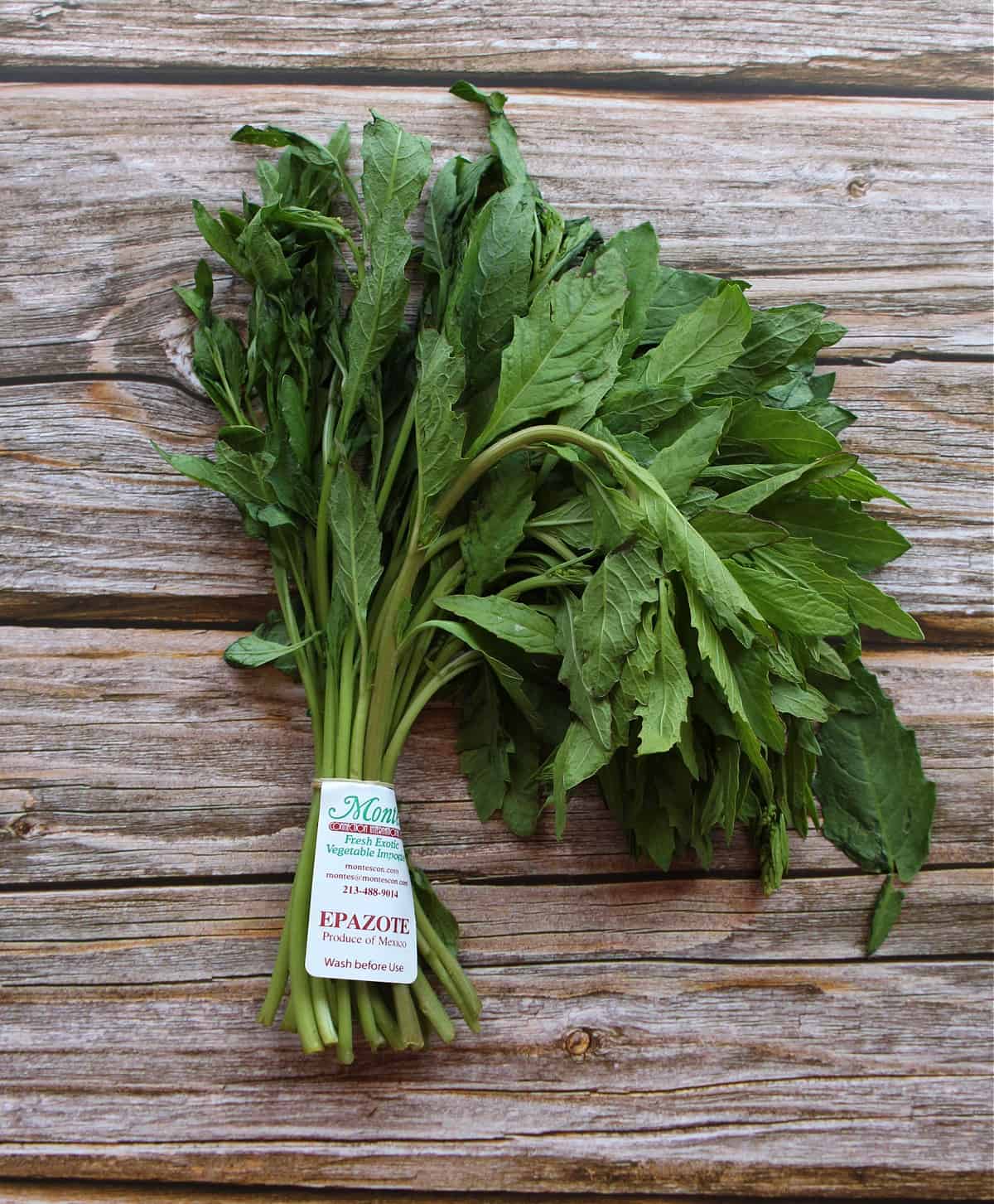 Where Does It Come From?

For centuries, epazote has been grown for both medicinal as well as cooking purposes. It’s often used in Oaxaca and throughout the Yucatan by the Mayan descendants.

Even though epazote is native to Central America, it is so prevalent that it has spread like a weed throughout large areas of North and South America.

The origin of the word epazote comes from the Mexican Aztec language, Nahuatl, and roughly translated to “stinky weed.” In some parts of Mexico as well as Guatamala, epazote is known as apazote, herba hedionda, ipasote or just plain old pazote.

It goes by several other names in English such as wormseed, skunk weed, goosefoot and even Mexican tea or Jesuit tea (theoretically because of the influence of priests like Padre Kino). Ezazote is often used to deal with digestive issues like intestinal parasites but we’ll stick to food, thank you. 🙂 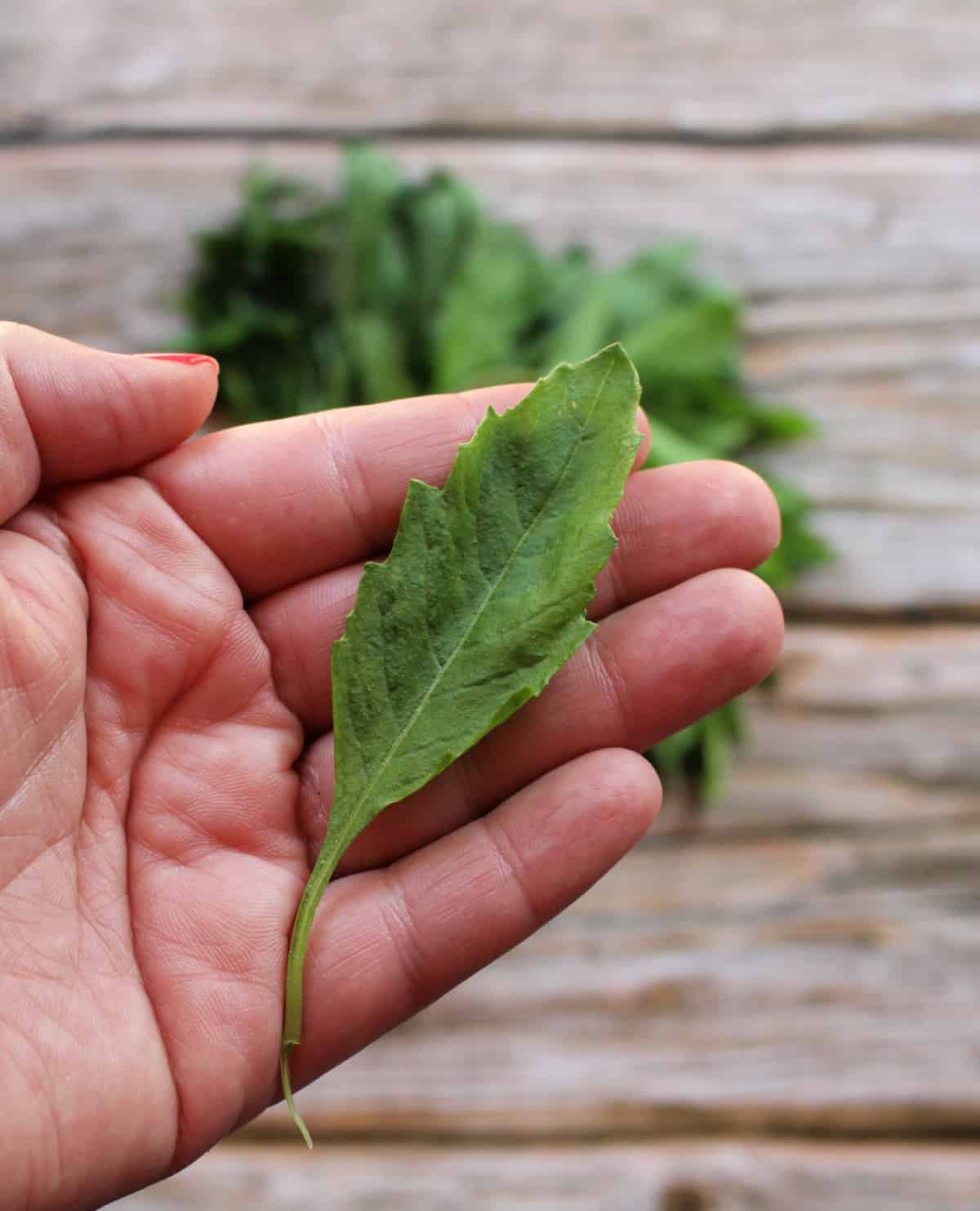 With a rather strong flavor profile, some people say that it tastes “medicinal.” Those with a more refined palette say that it has “notes of citrus, mint, anise, oregano and even (gulp) creosote or tar.

When it comes to flavor as mentioned before, fresh leaves and stems are the very best and the older ones happen to possess a bolder flavor. And while you can use the dried form, just like with cilantro, the flavor is weak in the dried herb. 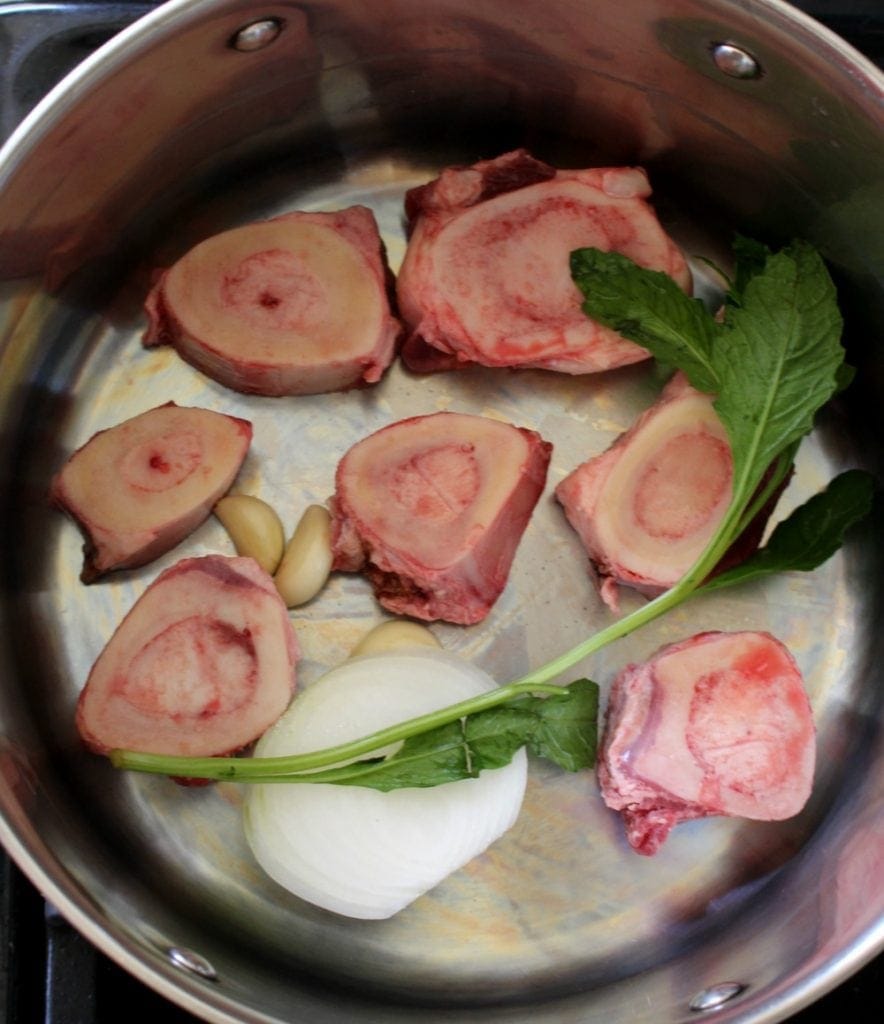 Frijoles de la Olla is the one dish that is most often where epazote is used as a seasoning. In particular, black beans get there share of the herb in traditional Mexican cooking.

It is not unusual to find a wee bit of this herb inside corn truffle quesadillas or esquites con tuetano. 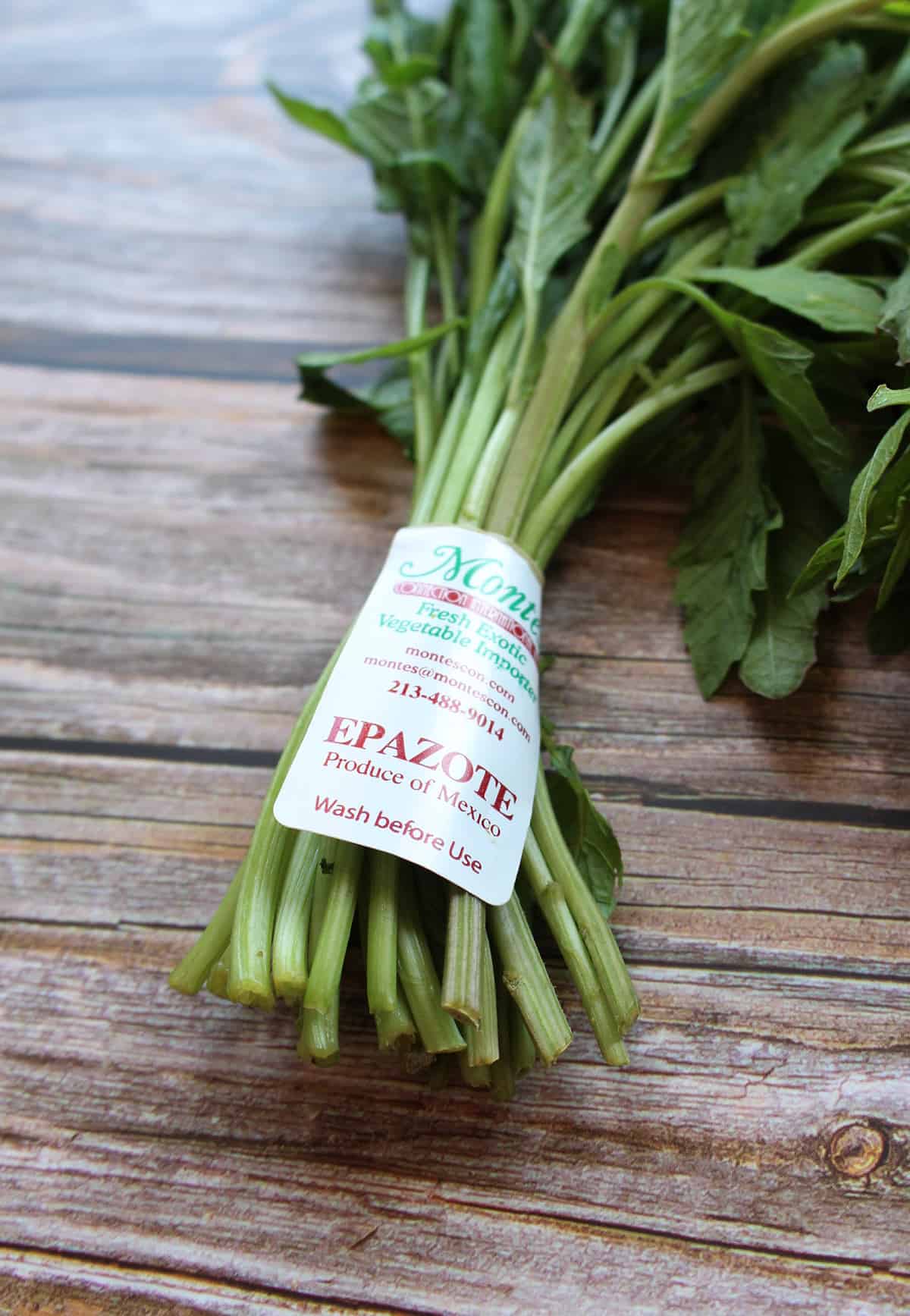 Where to Purchase It

OK. Now that you know where you can use it, where do you buy it? South of the U.S. it’s nearly always purchased fresh in Central American and Mexican mercados.

You can typically buy it in bunches at your local Mexican grocery store here in the States. However, if you can’t seem to find it locally, you can easily grow your own.

It’s surprisingly easy to raise and hard to kill (Remember how it “grows like a weed?”). You can easily order the seeds online. Once you get your seeds, epazote just needs good soil, sunshine, and watering every third day.

If fresh is impossible to find and you don’t have the room or desire to grow your own, you can at least try to get dried epazote.

You’ll have more luck in the Hispanic foods section of your larger chain grocery stores as well as your local Mexican grocery store.

Even though the flavor is not nearly as strong as the fresh epazote, it will still add a genuine Mexican flavor that cannot be duplicated elsewhere. 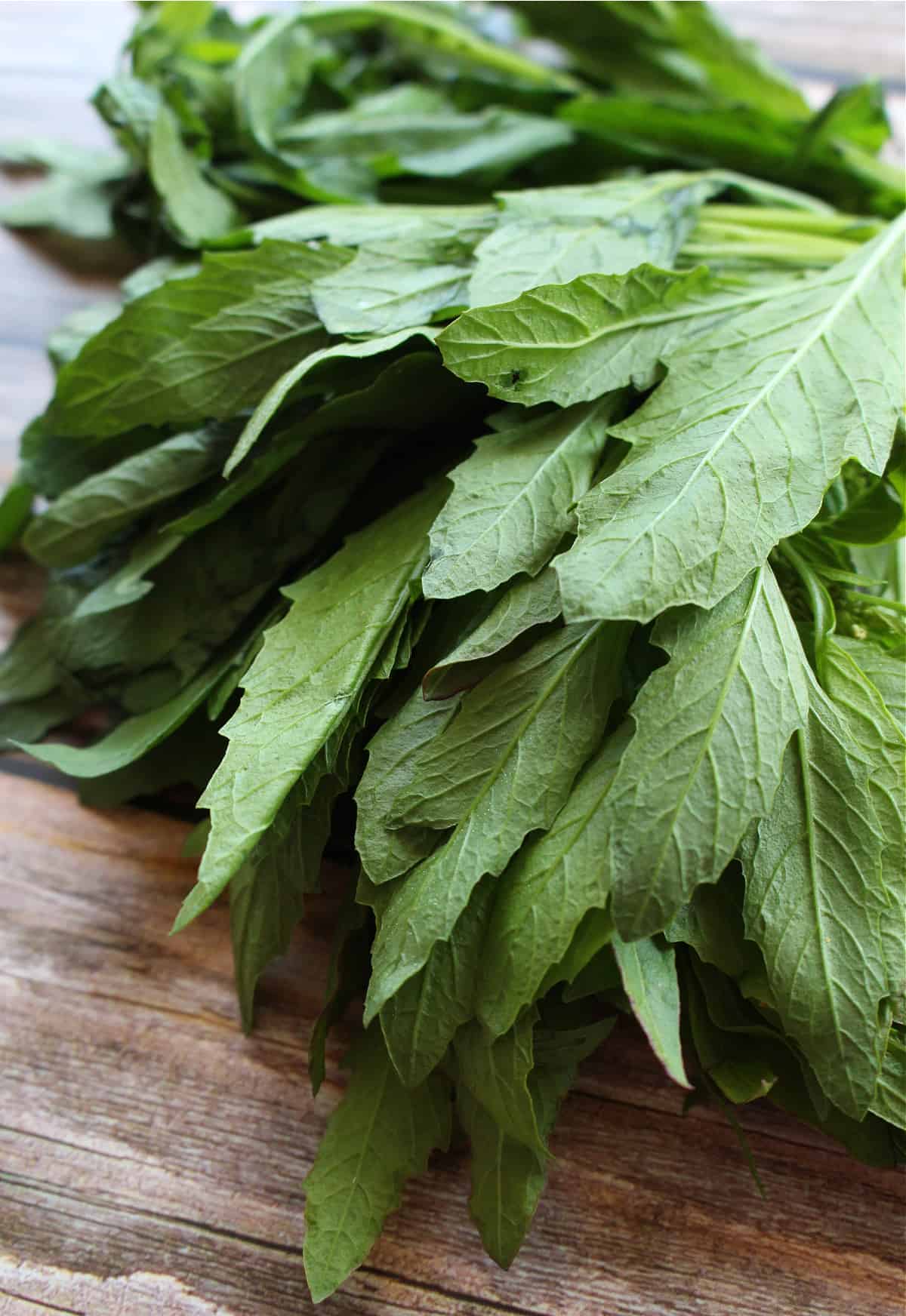 How Do I Store It?

Epazote is best when it’s alive so store it as if you were trying to preserve fresh cut flowers – stems in a glass filled with water.

Alternatively, you can place the leaves wrapped in a moist bunch of paper towels and place them in an unsealed plastic bag.

If you want to have epazote all year long, you can place the leaves in an ice cube tray of water and zap them in the freezer (one cube equals the usual amount of the herb for many dishes).

Because it is such a strong herb, epazote has played a role in traditional medicine for many generations. Typically used to control intestinal parasites, it’s most common for it as a tea.

You should be careful if you choose to make epazote tea. Small to moderate amounts should be used to avoid intestinal cramping and stomach pains as well as liver issues.

Caution should be exercised because in large quantities, it can be toxic. And as with all herbs, those who are pregnant should avoid excessive amounts of epazote.