Buñuelos, or Mexican Fritters, are crunchy bites of heaven. Topped with cinnamon and sugar, this traditional dessert is a must have during the Holidays.
Jump to Recipe Print Recipe 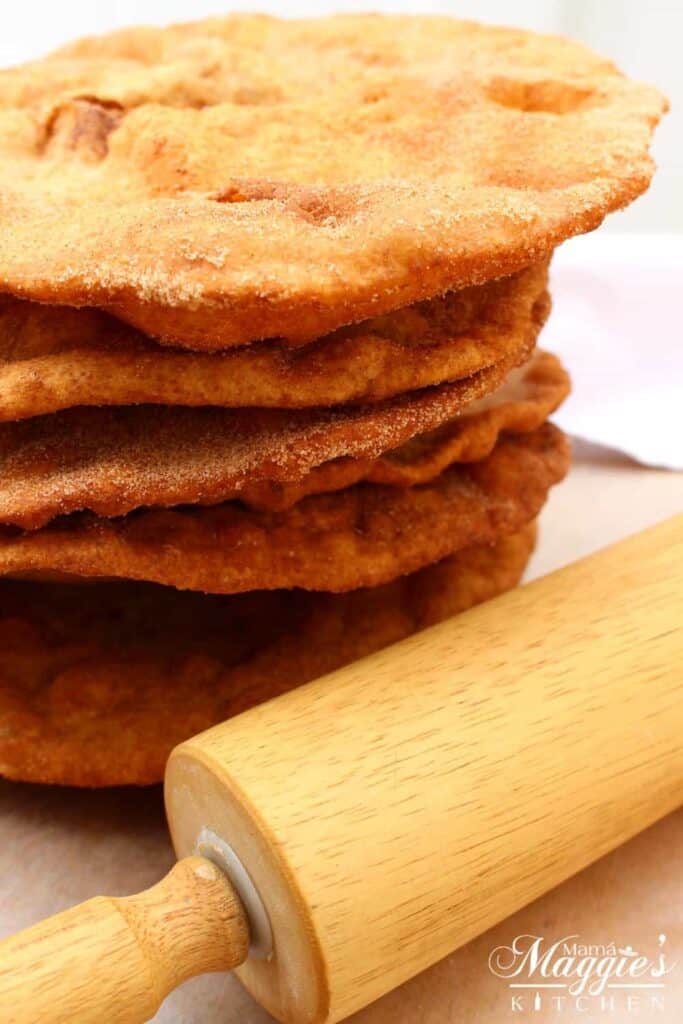 This post is very special to me because of my mom. My mom jumped on a train and came to visit me and my family by herself. I asked her to make buñuelos, and she happily accepted.

In a nutshell, Bunuelos are made from a sweet flour dough that has been fried and sprinkled with cinnamon and sugar.

Stacks of these Mexican fritters and pork tamales, that is what families give each other during the Holidays.

See my mom make Buñuelos in the video. 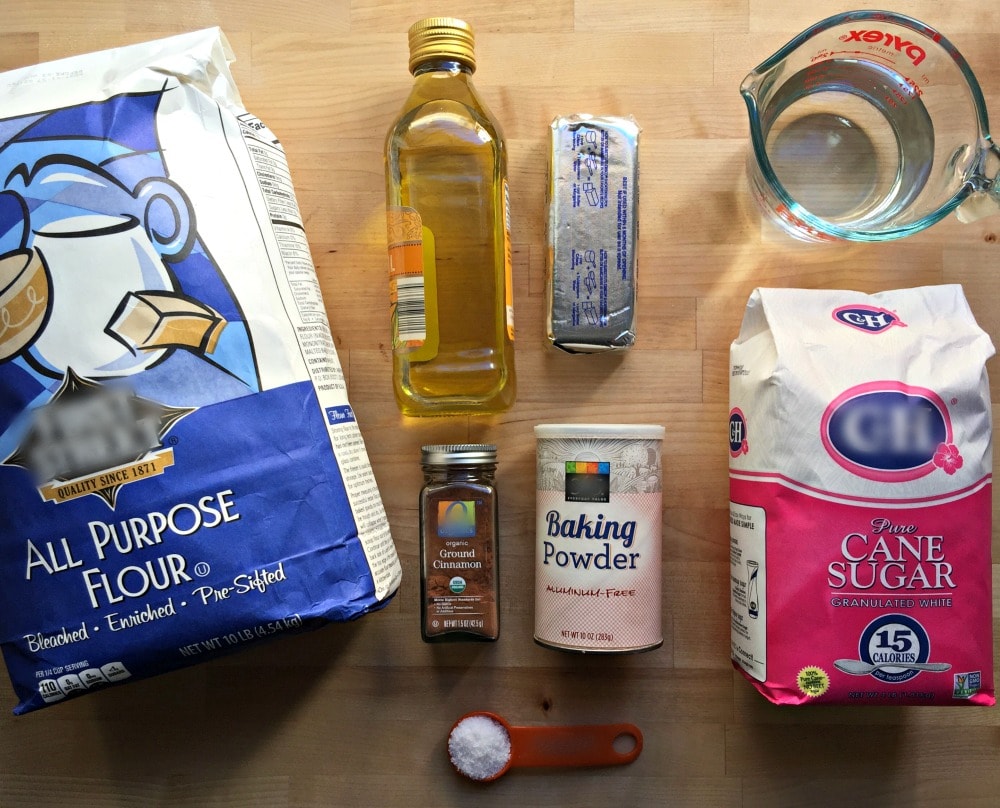 How to Make Buñuelos

See the picture above. These are the ingredients needed to make this traditional Mexican dessert.

My mother did all the mixing by hand because she’s old school. You can use a mixer if you don’t want to get your hands too dirty. 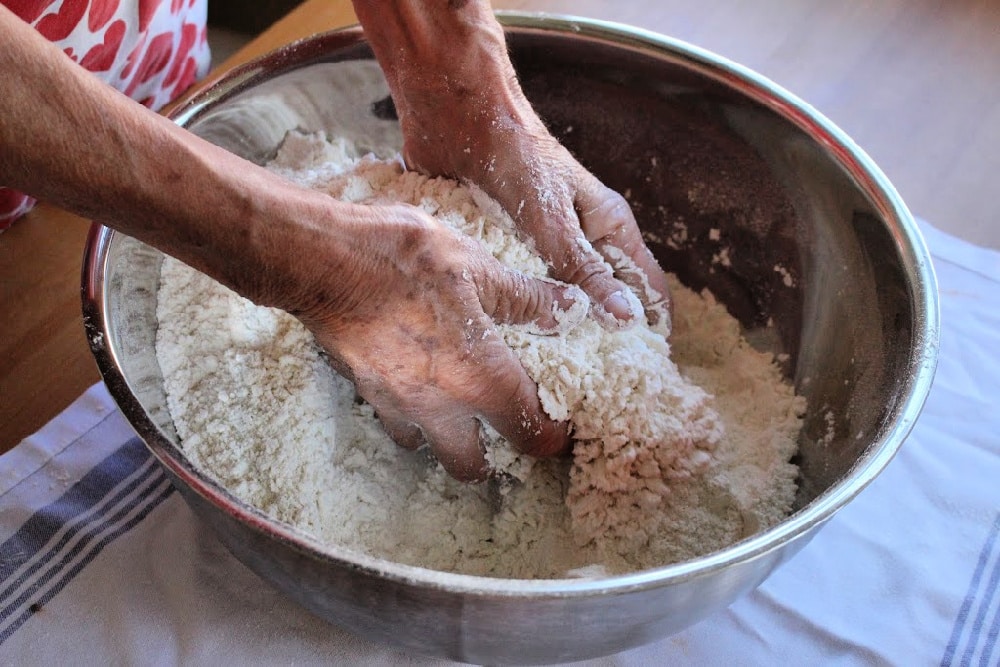 After you add the shortening, the flour mixture will be slightly crumbly.

Have you ever seen a Dutch Apple Pie or a cobbler with the crumbles on top? That’s exactly the consistency you are looking for. 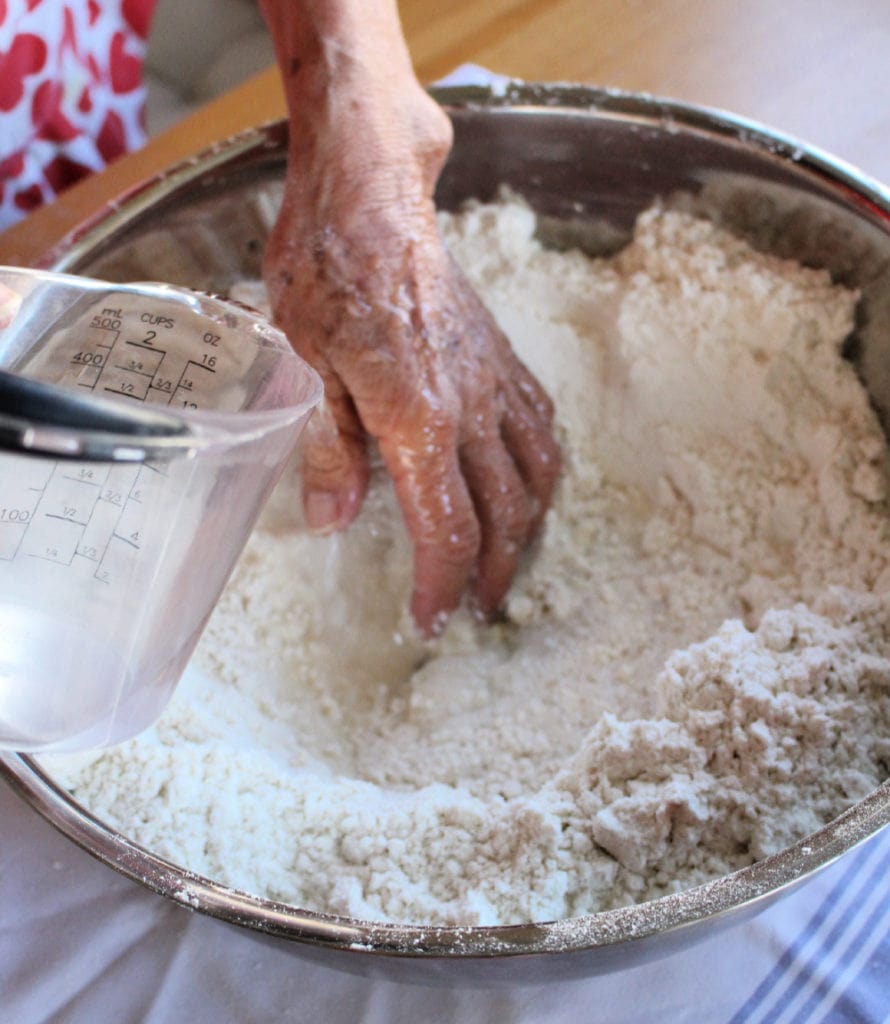 From here, add enough water to make a dough. 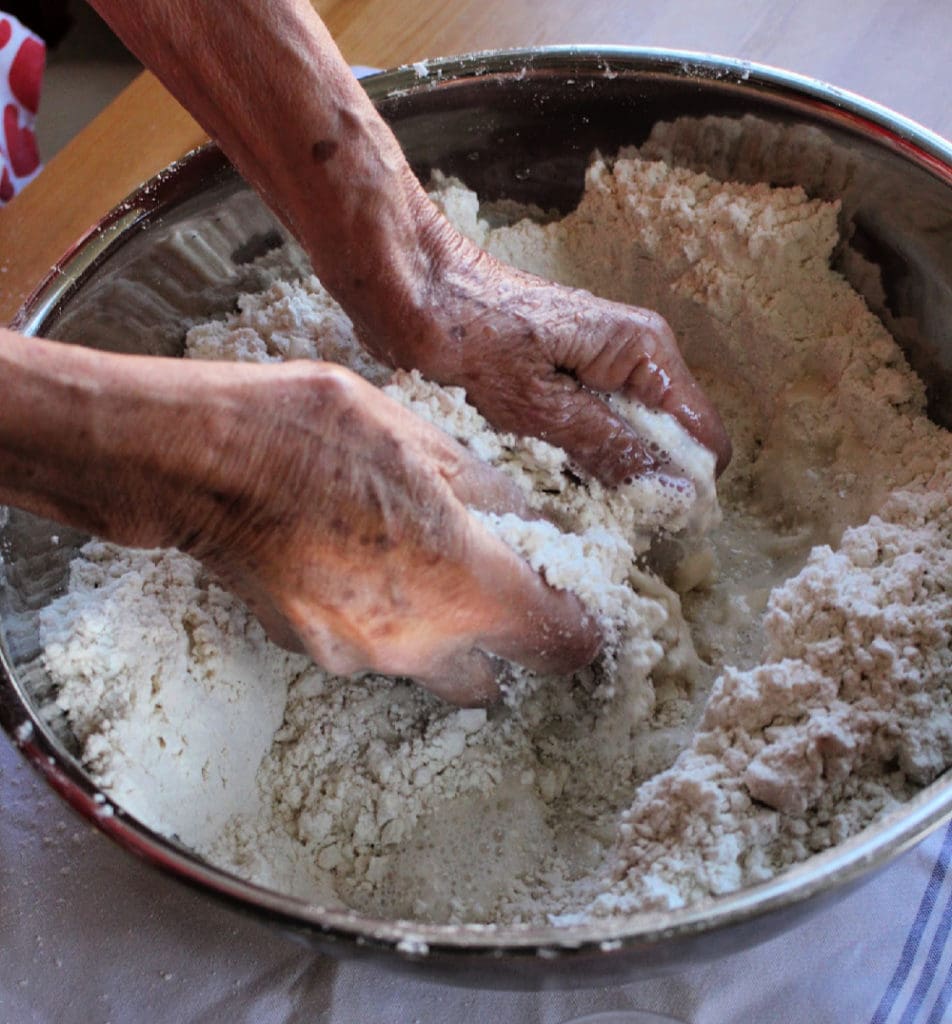 Eyeball it. If you add too much water and the dough is too wet, add more flour until you get the right consistency. It’s flour power! 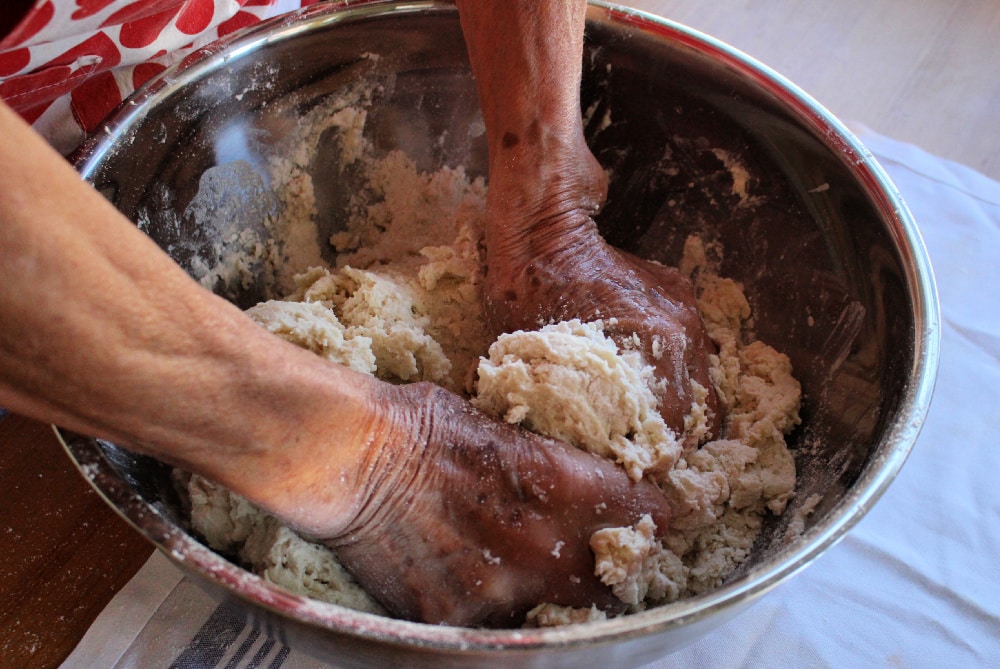 There is some kneading involved. This is where a good mixer comes in handy. Or, burn up some calories to make room for the buñuelos. 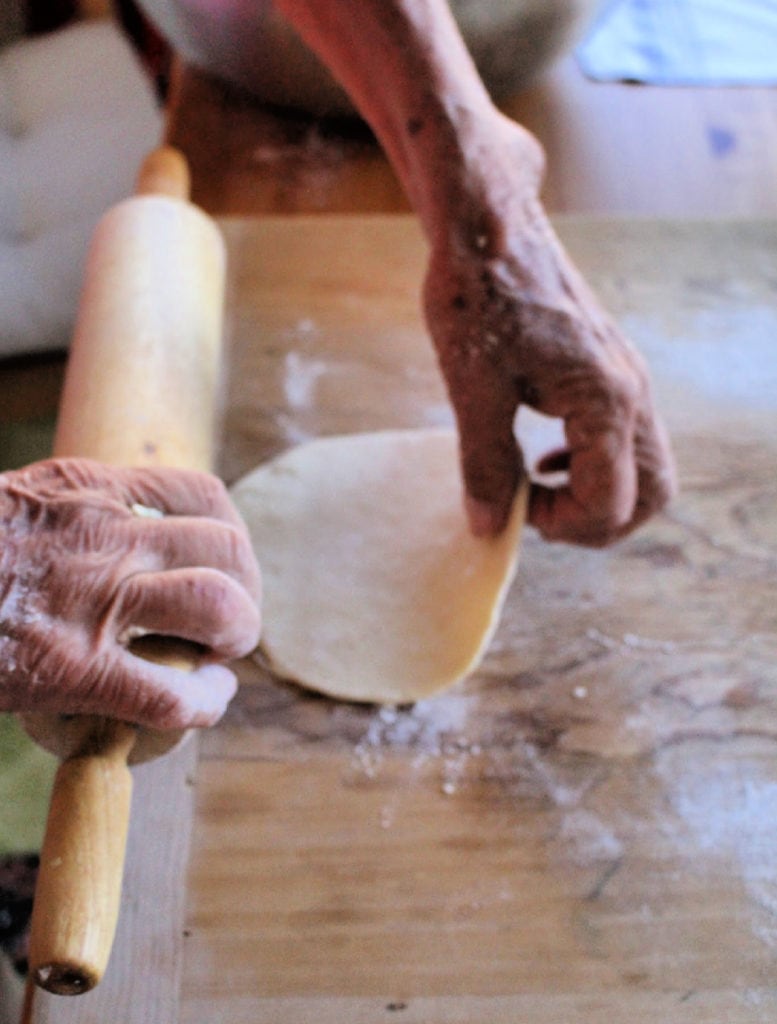 I’m rollin’… They hatin’ … Turn the dough as need to roll it out thin. Thin it to win it!

Differences:
Buñuelos are different in South American countries and in Spain. They are still sweet, but they are fried balls. Not like the Mexican kind. 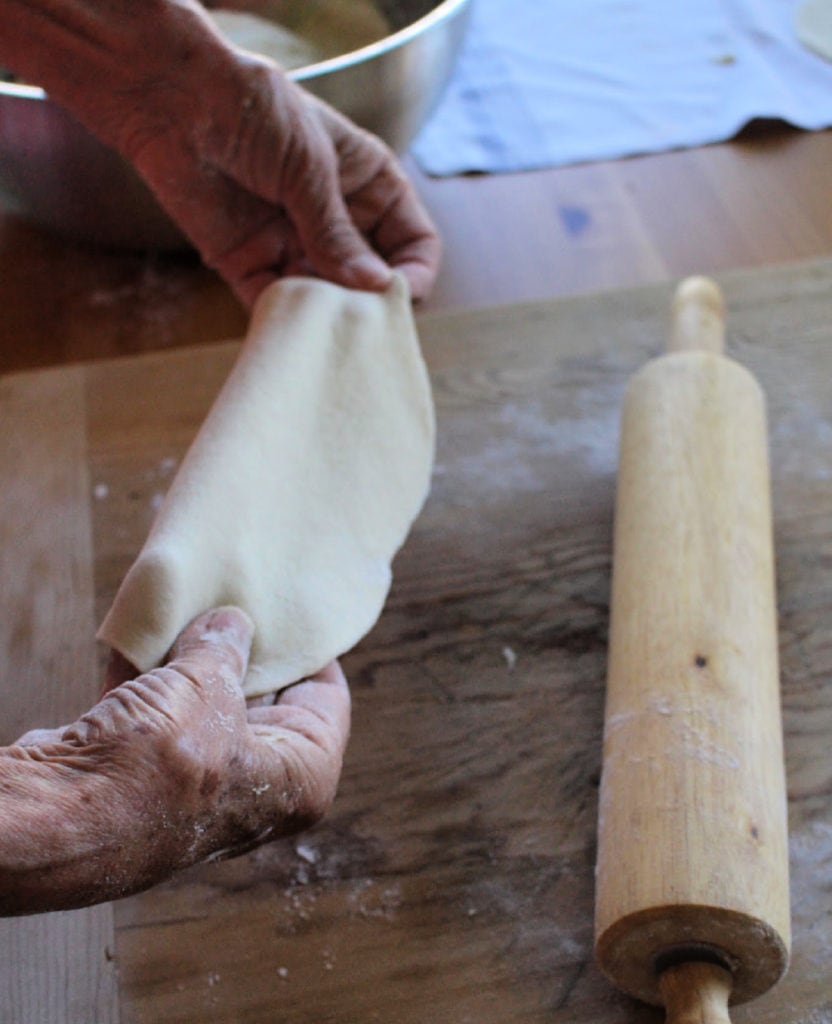 See how my mom stretches the dough?

Note: If a small hole forms, it’s ok. Just press it or pinch it back together.

Buñuelos are not perfect. I’ve eaten plenty of them with holes. Ohhhh holy night… Lol. 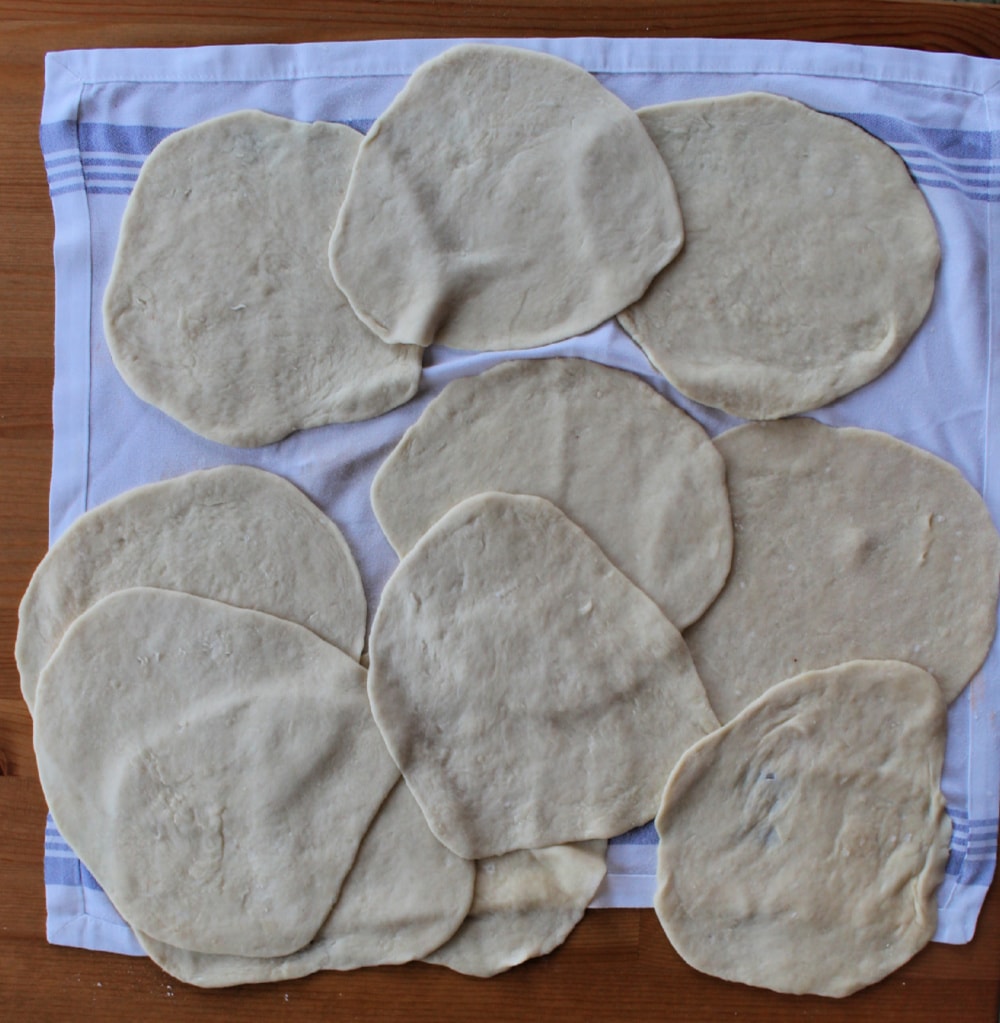 FYI: I am using canola oil. Olive oil and coconut oil are not good for frying. 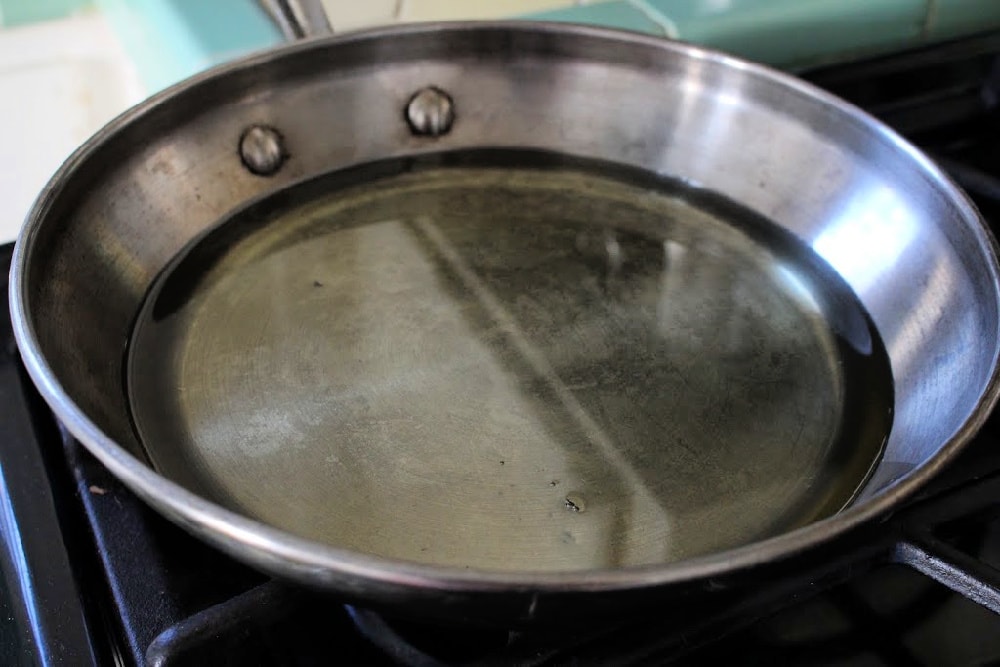 See how much oil I used? Well, I had to refill the pan twice to get through all of the frying.

Oily to bed, oily to rise, those buñuelos are better than fries.

Word to the Wise: If you burn the buñuelo while frying, you need to start all over again.

Dump the oil. Wash the pan. Or, all the other buñuelos will taste like burnt oil. 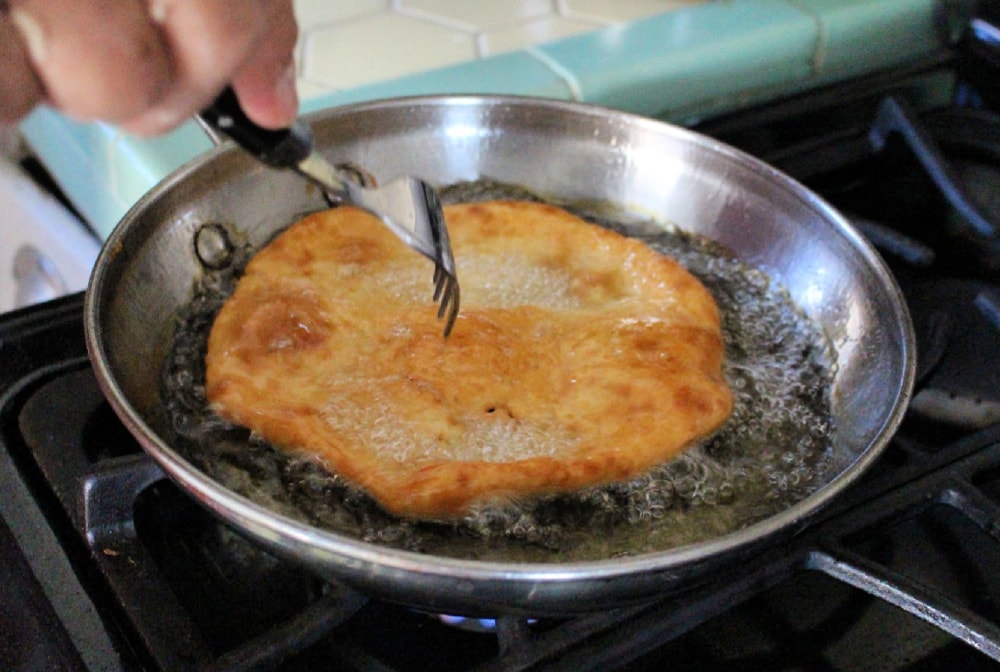 No joke. You gotta poke.

If you don’t poke the dough, the center will inflate and not cook. 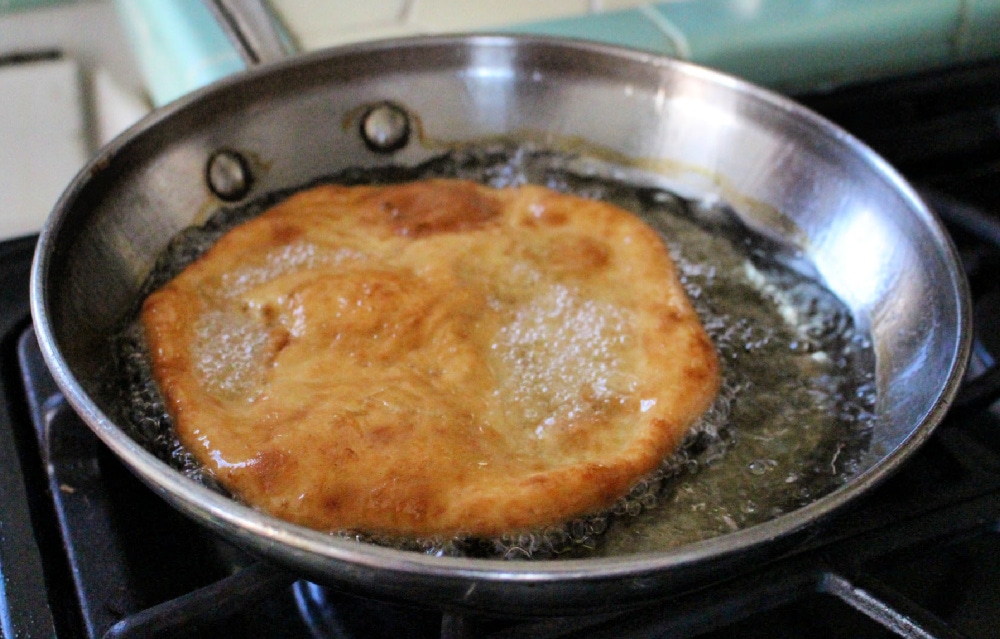 The oil is essential. 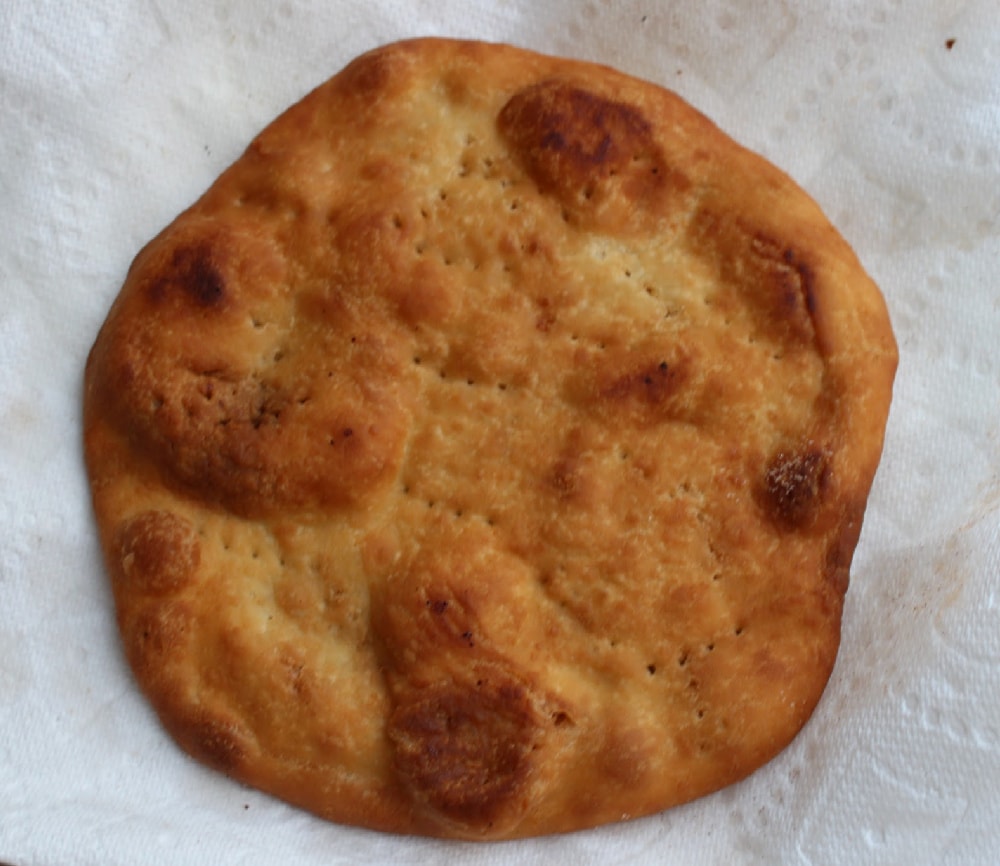 You don’t want to drain all the oil. The oil will help the cinnamon and sugar mixture stick to the fried tortilla.

Sprinkle while the buñuelo is still warm. If you sprinkle when it’s cold, the cinnamon and sugar will not stick to the fritter as easily.

This Mexican fried tortilla with sugar and cinnamon is usually had with a big cup of champurrado or chocolate atole. 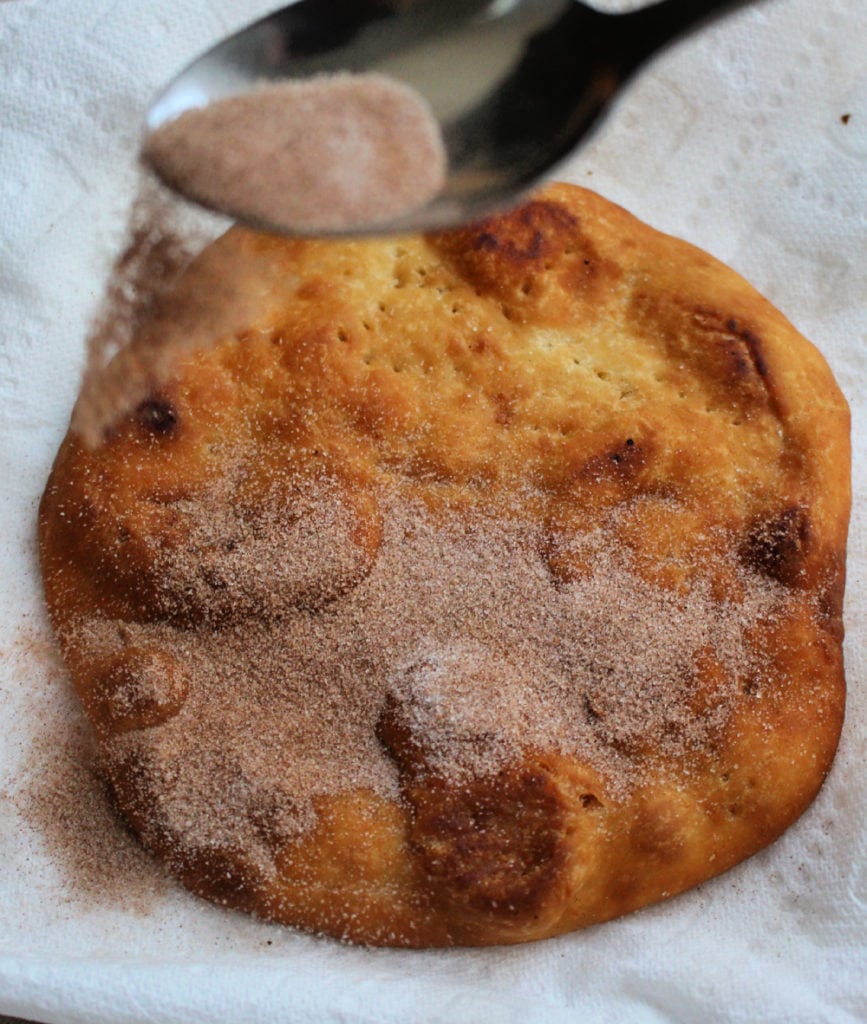 Then flip it and sprinkle the back.

Mexican Differences: My family is the state of Durango. My aunt, however, is from the state of Michoacán. They add a syrup made with piloncillo and anise to their buñuelos. 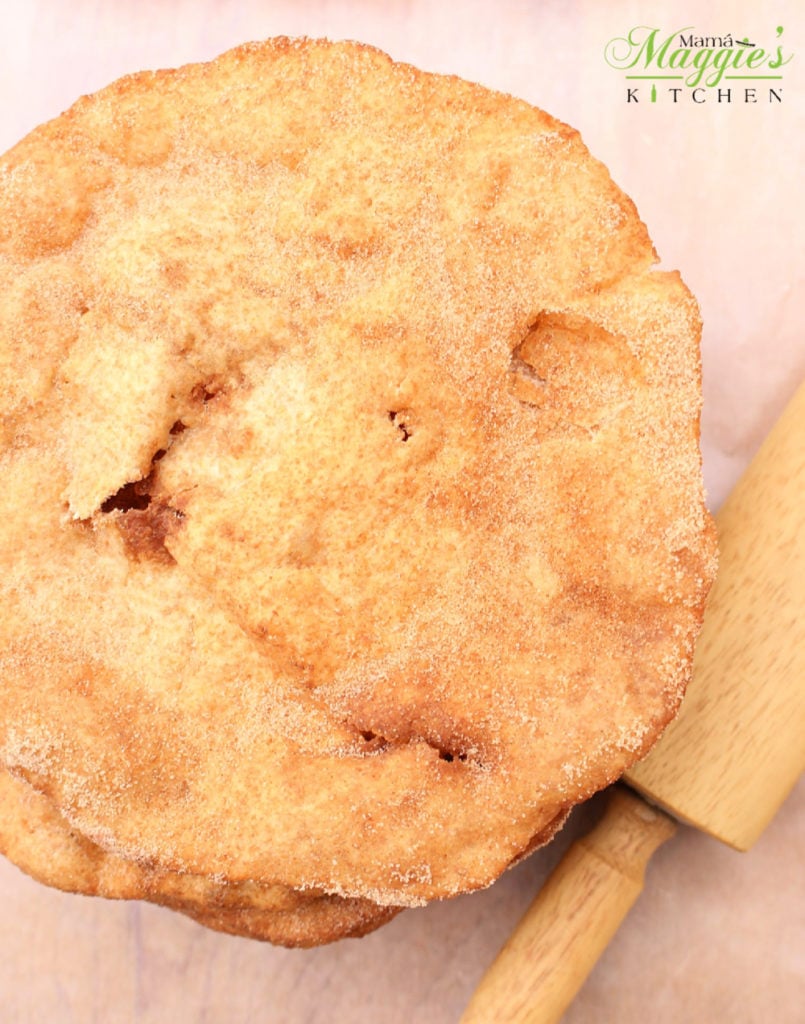 In Mexico, there are tortillerías (or stores where they sell tortillas) that sell the dough for buñuelos. You just have to go home and fry the dough. 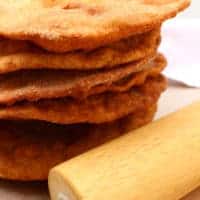 If you don't poke the dough while it's frying, it will not cook properly.